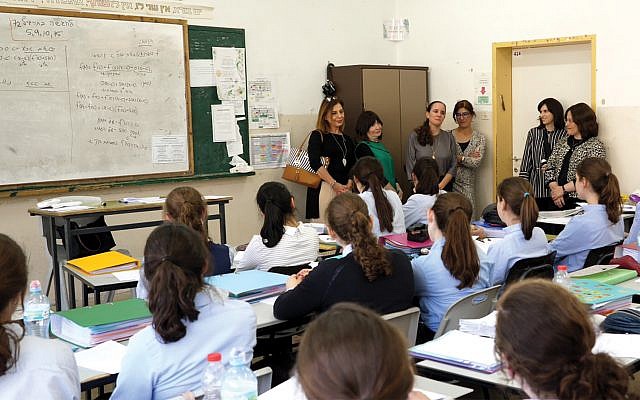 Tel Aviv — Zehava Feinberg is a 19-year-old from charedi girls’ seminary in Jerusalem who wanted to study computer science after high school in the hope of landing a job at an Israeli high-tech firm.

“I like problem solving and math,” she said. “I’m looking for a job that I won’t be bored at. I want it to be a good salary. I also want to raise a family.”

In theory, there should be plenty of opportunity for Feinberg. Israel’s high-tech sector is thirsty for young programming talent and intense demand for employees has driven up salaries so high that many companies have set up programming operations outside of Israel to ease labor costs. At the same time, charedi communities are eager for women to find high-paying jobs to provide a higher quality of life for a population group in which men are encouraged to engage in religious studies and the poverty rate was a staggering 43 percent in 2018.

Despite that potential match, the prospects for young charedi women like Feinberg to find employment as programmers in Israel’s technology industry have been discouraging. In the last two years, nearly three out of every four graduates of vocational computer science programs at the Bais Yaakov schools, a network of Ashkenazi ultra-Orthodox girls seminaries with 8,000 students, did not find work with technology companies. The graduates who do get jobs in the field are usually employed in low-paid quality assurance jobs. At the same time, charedi women became convinced that the industry was biased against them, and often never even bothered to apply for entry level jobs.

But an educational pilot project is trying to improve the prospects for female graduates of charedi post-high school seminaries to find work in high tech. Dubbed “Adva” (small wave or ripple in Hebrew), the project aims to give high school graduates a post-secondary education on par with Israeli universities and colleges (institutions that are shunned by ultra-Orthodox as “foreign” and sacrilegious).

Feinberg is part of the first Adva cohort — 86 students spread over three Jerusalem schools — and recently completed her first year of studies, which focused on catch-up math courses in statistics, calculus and linear algebra, as well beginning programming languages.

“Our math level was not such a high level,” said Feinberg. At the beginning of the year we had intensive math to bring it up just so we could learn.”

The curriculum has been developed with input and oversight from university computer science professors and executives from technology multinationals. The program is a joint initiative of Start-Up Nation Central, a non-governmental organization promoting Israel’s tech sector, the companies themselves and the Bais Yaakov network of schools. (Start-Up Nation Central did not provide exact figures on the cost of the pilot, saying only that the first year’s costs were “expensive” and that government agencies are expected to pick up some costs for the second year.) It also has the blessing of ultra-Orthodox rabbinic authorities.

The disconnect between Israel’s reclusive ultra-Orthodox community and larger society animates the country’s daily political debate and is shaping up as a major wedge issue in the Sept. 17 elections. Issues of military draft exemptions for ultra-Orthodox 18-year-olds and charedi-enforced restrictions on marriage, dietary laws and Sabbath observance have created a bitter divide.

But that chasm also threatens the country’s economy: with low levels of employment, the impoverished charedi (and Israeli Arab) populations will eventually become a drag on public finances. Economists have warned that Israel needs to take urgent steps to better integrate the ultra-Orthodox and Israeli Arabs into the larger economy.

“We can’t sustain our economy if Arabs and charedim go their separate ways and don’t participate,” said Eugene Kandell, the chief executive of Start-Up Nation Central and a former economic adviser to Prime Minister Benjamin Netanyahu.

“The majority of relations between non-religious and charedi populations is driven on fear and non-familiarity. Each one thinks the other wants to change them and delegitimize their way of life.”

The Adva initiative began with Yisrael Tik, the head of external relations at Bais Yaakov and a former director of education for the ultra-Orthodox settlement of Beitar Ilit, who wanted to improve the job acceptance rate for seminary students studying computers. Tik discussed the challenge with colleagues on Israel’s Council for Higher Education (on which he also serves), who put him in contact with Start-Up Nation Central.

The first thing the stakeholders realized was that the vocational curriculum developed by Israel’s labor ministry for the seminaries was not up to par.

“The computer programs at seminaries don’t provide what the industry requires,” Tik said. “They were built for people who don’t attend university.”

As recently as a decade ago, nearly two-thirds of charedi women became educators within their own community. That figure has dropped to just over one-third, as more of the women find work as nurses and caregivers. For years teaching was the most prized women’s profession within the charedi community, but now, women with engineering education are also sought after as potential matches. Poverty rates among the ultra-Orthodox are dropping, but the community still lags far behind the rest of Israel.

“People are more practical now,” said Gilad Malach, who heads the ultra-Orthodox program at the Israel Democracy Institute. “There is a need and wish for a lot of women to go into areas of high tech. Even within the community, there is an understanding that if a woman is working and earning a lot of money,” it frees a man “to [pursue] religious studies.”

Adva isn’t the first educational program to embrace the challenge of integrating ultra-Orthodox women into the tech workforce. Special courses at three Jerusalem academic colleges are tailored to ultra-Orthodox students, though only 130 charedi women are receiving degrees a year — far from the number necessary to help the industry or boost the standard of living of charedi families.

And more than a decade ago, programming companies like Matrix software opened offices in the ultra-Orthodox settlement of Modiin Ilit to employ charedi women in a gender segregated work environment that offered flexible hours so employees could balance home life and employment. But those positions were outsourced programming projects with relatively low pay.

Instructors in the Bais Yakov program are all charedi women with doctorates in their respective fields. To overcome suspicions about the tech work environments, community rabbinic authorities visited the offices of technology companies taking part in the program.

But there is still ample resistance to women pursuing degrees in high tech. In May, at a conference for the parents of women studying at the post-high-school seminaries, Modiin Ilit Chief Rabbi Meir Kessler complained about husbands who encourage women to earn better salaries. He warned that “immodest” workplaces promote “evil” inclinations, mixing with secular co-workers and leave wives too tired to handle their roles as homemakers.

After the publication of a report on the program in an ultra-Orthodox newspaper, a public leaflet warned the public that “the defense establishment” was behind a secret campaign to turn the charedi seminaries into academic colleges with help from “collaborators” from within the seminaries.