“Judaism and Zionism are Absolute Antonyms”

The above is on posters being held by some of the protesters in these videos.

Many of the ultra-Orthodox zealots in this video are funded by American Jewish counterparts. These are people who believe, from a fundamental perspective, in the destruction of the State of Israel. And, as the birth rate within the ultra-Orthodox community grows exponentially when compared to secular birth rates, once must wonder what happens when a majority of Israel’s Jews are opposed to the existence of the very state in which they live.

To the American supporters of these radical Jewish groups, who characterize every criticism as anti-Semitism, unwilling to stand up and say that this is not Judaism but something altogether foreign, you will have the inevitable destruction of the Jewish state as we know it today, sitting on your collective shoulders.

Protesters like those above are destructive to all Jewish identity, whether religious or secular. They are not tolerant of anything or anyone and yet, as American Jewish organizations fight anti-Semitism they refuse to question the integrity of the version of Judaism depicted above.

Mainstream Judaism does not support the view that “Judaism and Zionism are Absolute Antonyms.” Sadly, it might be time for organizations like Agudath Israel, the American Jewish Congress, the Jewish National Fund and others to speak out against the expression of “Judaism” in this video.

The following is a small excerpt of an op-ed posted in Religious News Service by Rabbi Avi Shafran, director of public affairs of Agugath Israel. While our views are not necessarily aligned with those of Agudath Israel (and likewise the reverse is probably true), Rabbi Shafran’s comments here are worth a review.

Our objectives of keeping people safe do align, even if we do not agree with how strict restrictions should be or how they should be imposed and implemented. While we agree that there are many within the Haredi community that did follow the rules, those that chose to flout them did so with inglorious detail and the optics have been bad.

Like Rabbi Shafran, we have stated that we do not believe Covid-19 mandates to be anti-Semitic or anti-Jewish. However, we also do not believe them to be misguided.

(RNS) — Rightly or wrongly, many in New York’s Haredi, or “ultra-Orthodox” Jewish, community have concluded that Governor Andrew Cuomo has not engaged in a good-faith effort to balance the needs of their families with his responsibility to keep them and all New Yorkers safe.

Some members of Haredi communities, to be sure, have acted less than responsibly at times, but they are not alone, even among religious groups. Yet the governor (and New York City Mayor Bill De Blasio) has repeatedly and exclusively focused on Haredi neighborhoods, saying things like: “What’s happening there is the rules were never enforced… they never followed the first rules.”

Most Haredim, like most members of other religious or ethnic groups, very much did follow those rules.

Anger at the governor’s statements has fueled two nights of loud protests in Brooklyn, which, along with a much-videoed rabble-rouser’s ugly words and threats, garnered national attention.

The new rules, despite the governor’s claim, were widely perceived as an attempt not to protect but to punish. He shut down not only entire Jewish schools, but also, in some Haredi neighborhoods, limited houses of worship, no matter how large their space, to a 10-person maximum occupancy.

However, establishing a limit of 10 people to all buildings used for a specific purpose, no matter how large they might be, is something short of scientifically sound.

To continue reading in the Religion News Service, click here.

WILL THE RELIGIOUS COMMUNITY ABIDE BY THE JUDGE’S RULING AFTER A 2-HOUR HEARING AND A LENGTHY REASONED ARGUMENT?

On October 8, 2020, Agudath Israel of America, along with other Plaintiffs filed a law suite against Governor Andrew Cuomo:

argue[d] that the Executive Order’s restrictions unconstitutionally discriminate against religious practice while simultaneously permitting comparable secular conduct. Moreover, the restrictions violate Free Exercise rights because they appear to target conduct due to their religious motivation.

The filing requested that the court – in light of the holidays beginning [today] – immediately grant a temporary restraining order (TRO) preventing the state government from enforcing the new limits, as well as declaring the executive order unconstitutional.

In a hearing held by video and audio, which listed 1492 participants at one point, Judge Kiyo A. Matsumoto gave a significantly thorough and well-reasoned review of the issues raised by Agudath Israel as well as the counter arguments by Governor Cuomo’s attorneys, who were asked specific questions for points of clarification.

The main question at hand was whether or not the Governor’s recent Executive Order placed a disproportionate and undue burden upon the religious rights of one particular group of people to freely practice religion under the Constitution.

The final ruling was that the current public health emergency, the rise in cases of Covid-19, and the health threat it presents outweighs the rights of any one religious group. In a well-reasoned and lengthy discussion, Judge Matsumoto ruled against Agudath Israel. She came to the conclusion that the health and safety of the population at large trumps any single religious group’s religious freedoms.

END_OF_DOCUMENT_TOKEN_TO_BE_REPLACED 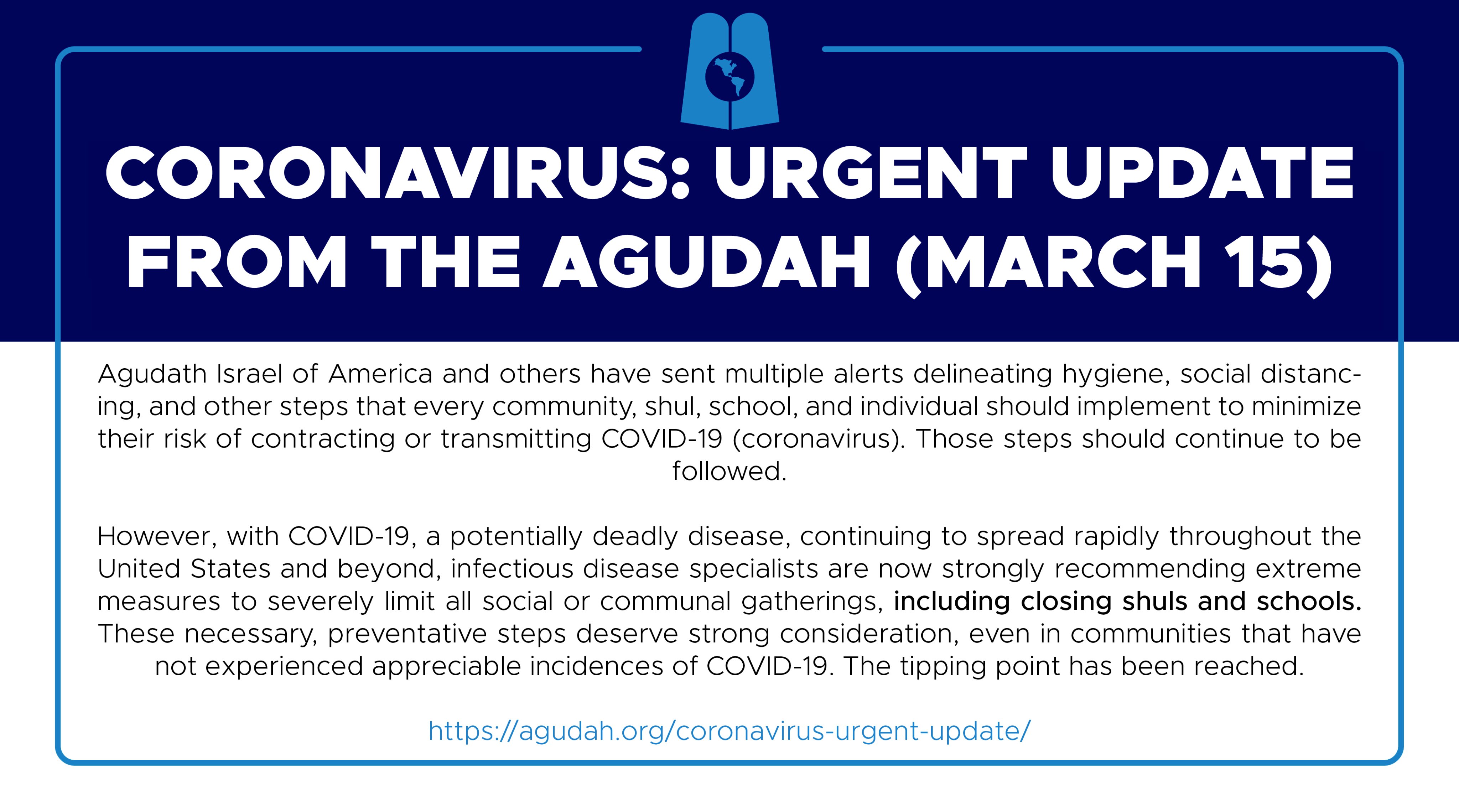 This Orthodox Brooklyn doctor saw the truth about coronavirus weeks ago

On Wednesday evening last week, Dr. Stuart Ditchek convened an unprecedented meeting. At a synagogue in Midwood, Brooklyn, he gathered 170 rabbis, yeshiva principals and administrators (some streaming in via Zoom) to ask them to make a difficult, but necessary, decision: close their doors immediately to help stop the spread of coronavirus.

Ditchek, a pediatrician and an Orthodox Jew who is well known in South Brooklyn’s Orthodox communities, has been working at the grassroots level over the past weeks, trying to urge yeshivas and synagogues to help “flatten the curve” of new infections, giving hospitals more space and resources to treat patients with coronavirus and other serious illnesses.

At the meeting, Ditchek presented the evidence in a slide deck: The infection rate is high. Children under 10 are not dying, but they are transmitting the disease. Limiting interaction of all kinds, immediately, will make an enormous difference compared with waiting even a few days, given the exponential rate of new infections every day.

“It was well received by about half of the room,” Ditchek said in a phone interview Sunday morning, in between seeing patients and speaking to rabbis calling for his advice. “It was not so well received by the other half.”

As the coronavirus has spread across the United States, it hit the Orthodox community early and hard. A synagogue, Yeshiva University and several schools in suburban Westchester County were among the first institutions in the country to close their doors in response to the virus.

Yet the Orthodox community has grappled in recent days about whether to push for full-scale closures of schools and shuls across the country. Many organizations — some persuaded by Ditchek, working around the clock — have closed. On Sunday afternoon, Agudath Israel of America, the largest Orthodox umbrella organization, reversed itself and started urging communities to shutter their synagogues and schools. There are still some holdouts, however, and Ditchek hasn’t given up on them.

END_OF_DOCUMENT_TOKEN_TO_BE_REPLACED

Below we have republished a portion of an opinion that appeared in the Jewish Telegraphic Agency, written by Rabbi Avi Shafran of Agudath Israel. We would like to thank the person who sent this our way, though we are certain he would not agree with our conclusions. Thankfully, there is a mutual respect for differing opinions. We thank him for that also.

There are a few points that should be made about Shafran’s opinion in JTA. The first is we believe you can criticize over-development and the draining of the public school system for the benefit of private yeshivas (and parochial schools) and still defend against anti-Semitism and resentment. The two are not mutually exclusive. While he refers to the links as “indirect” he spends an inordinate amount of time criticizing efforts to uphold educational standards, presumably albeit indirectly linking criticism to hate.

We take the position that only when these uncomfortable subjects are aired can the differences in perception (that often create resentment) be either resolved or peacefully tabled. One can agree to disagree so long as both sides can be vocal and respectful.

Second, Safran’s comments about the criticism of the substandard Yeshiva education in many (but not all) Hasidic yeshivas is, in our belief misguided.  Contrary to Shafran’s opinion, a fair indictment of a school system that public money is also partially funding does not detract from defending the religious beliefs that the children who graduate from those yeshivas share. It is simply a criticism of the leadership and the political governmental system that allows the education of these kids to be neglected. If public money is being used to fund these yeshivas, even a single dollar of public tax funds, then they should comply to certain state mandates. To do otherwise is an unfair requirement on all taxpayers; and that does not even address the future tax burdens that stem from inadequate education.

If Shafran’s comments are to be taken to their extreme, then perhaps this country should allow schools for white supremacists, schools for radical Muslims, schools for the Church of Latter Day Saints, Scientologists, and an endless list, all without any oversight guaranteeing that the children have some level of conformity to basic subjects when they graduate. According to Shafran, if applied equally to all faiths, any criticism of any non-conforming schools, whatever the religious belief, is contrary to a peaceful co-existence. That is absurd. Demanding certain standards be met is not indicting an entire religious belief system. Rather, it is holding an educational system to a conforming standard. The United States is based upon a system of equality and laws should be upheld equally. For the yeshiva system in New York, equality has gone out the window.

END_OF_DOCUMENT_TOKEN_TO_BE_REPLACED

New York is trying to reform the Orthodox yeshiva system, which some graduates say barely taught them to speak English

NEW YORK (JTA) — Gene Steinberg was born and raised barely an hour outside New York City, but well into adulthood he could barely speak the language of his native country.

Raised in a mostly Hasidic community 50 miles northwest of Manhattan, Steinberg, now 43, attended schools where Yiddish was the primary language of instruction. Until age 12, he received only an hour of instruction in secular subjects each day. After that, the number dropped to zero. From early morning until late in the evening, he spent his time immersed in the study of Jewish texts.

When he went to enroll at a community college at the age of 37, he was told he had to take an English class aimed at new immigrants.

“I had a conversation with the person in charge and the first question she asked me [was], ‘When did you immigrate? What year?’” Seinberg recalled. “And I tried to explain to her, I didn’t immigrate. I was born here.”