An ultra-Orthodox health pioneer has expressed intense frustration at coronavirus disobedience, and said it’s bringing hatred on his community and fanning the flames of anti-Semitism.

Yehuda Meshi-Zahav hauls body bags of the COVID-19 deceased, but even the warnings he delivers after carrying out this gory work fall on deaf ears, he said.

His organization ZAKA, a medical aid and rescue nonprofit, has helped some 1,800 God-fearing Diaspora Jews killed by the coronavirus to fulfill their dying wish, transferring them from planes for eternal rest in Israel’s sacred soil, he said. He also personally retrieves bodies of Israelis who have died.

But he is astounded that nothing he can say or do — whether talk of the body bags, Israel’s dizzying coronavirus stats shared in Yiddish, or personal stories of those who died — can convince the slice of the Haredi community that is insistently noncooperative in the battle against the coronavirus to change its ways.

Meshi-Zahav spoke to The Times of Israel on Sunday, at the end of the Jewish holiday season, amid numerous reports that mass gatherings had taken place among Israeli Haredim in defiance of coronavirus rules.

These included celebrations for Saturday’s Simhat Torah festival, held despite statistics indicating that ultra-Orthodox Israelis, around 12 percent of the population, are catching the virus out of proportion to others. Hospitals are heavily populated by Haredim, while some members of the community are being treated by a program to give breathing support at home, without knowledge of the authorities.

“I explain to people that others are looking at them, and saying that we’re in this situation because of Haredim, and that the 12 percent is infecting the 80-plus percent, and that ‘you’ are ‘stealing’ the breathing machines,” Meshi-Zahav said. “And I say that this hatred is terrible, but what people see is the continuation of singing, dancing, public prayers, and simchas [celebrations] — as well as continuation of protests.”

It’s a misconception to assume that Haredi refusal to follow virus rules is driven by disrespect to others, he said, arguing that it stems from a misguided desire to retain religious routine at all costs. In his view, strong and determined leadership could fix this with a clarion call insisting that the religious imperative to save life comes above all, but there is no such leadership on the horizon.

He said there are large parts of the Haredi community where coronavirus rules are carefully followed, and there are rabbis who encourage this. And he stressed that disproportionately high virus rates among Haredim don’t reflect disobedience alone, but to a large extent also circumstances, like large families and cramped conditions.

Yet he is worried that a notable minority is breaking rules, which causes infection to spread, and lamented: “People don’t understand we’re all in the same boat. It’s like the story of the people who drill a hole under their seat in boat, saying it’ll only affect them, but of course, it affects everyone.”

Meshi-Zahav is particularly concerned by the fact that Haredi disobedience has an international element. In New York’s Haredi community, where virus rates have been high, there have been some very visible expressions of disdain for restrictions, including angry protests against coronavirus shutdowns. 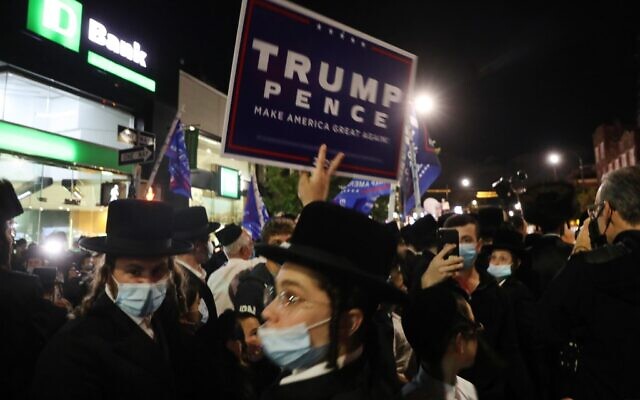 Groups of protesters gather in the Brooklyn neighborhood of Borough Park to denounce lockdowns of their neighborhood due to a spike in COVID-19 cases on October 7, 2020 in New York City. (Spencer Platt/Getty Images/AFP)

And he believes that the situation in Israel and New York is playing into the hands of anti-Semites. “If Jews are saying the things I mentioned about each other, of course others will say them,” he said. “They will take the symbol of a man in Jewish dress, and connect it to the coronavirus

To Continue Reading the Times of Israel in its entirety click here.