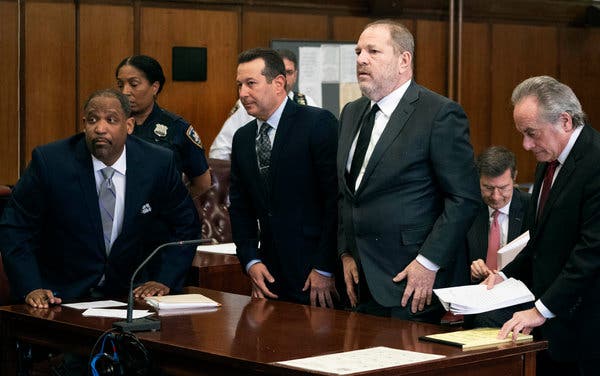 In the six months since Harvey Weinstein built his new “dream team” of heavy-hitting lawyers to represent him against sexual assault charges in Manhattan, the movie producer’s carefully selected legal cast has completely fallen apart.

Mr. Weinstein, whose alleged sexual misconduct set in motion the global #MeToo movement, and his first lawyer parted ways in January. He then hired a team that included a former Manhattan prosecutor and three attorneys who had defended celebrities and some of the country’s most vilified defendants.

But one by one, Mr. Weinstein’s new lawyers have bowed out. With less than three months until the trial begins, Jose Baez, one of the producer’s last remaining lawyers, asked a State Supreme Court justice in Manhattan to allow him to withdraw from the case, according to a person with knowledge of the matter, who spoke on the condition of anonymity to discuss private communications.

“Mr. Weinstein has been aware since at least May 15 that it was very unlikely that I would be able to continue on this case,” Mr. Baez said in a letter to Justice James Burke on Friday.

Mr. Baez did not respond to requests for comment on Monday.

Mr. Weinstein formed his team of star lawyers after he parted ways with Benjamin Brafman, a prominent defense lawyer in Manhattan, following weeks of intense arguing.

Mr. Weinstein, 67, faces charges that he raped one woman, who has not been identified, at a Midtown hotel in March 2013, and forced a second woman, Mimi Haleyi, a production assistant, to let him perform oral sex on her at his Manhattan apartment in 2006.

Mr. Weinstein has denied the allegations and has said the sexual encounters were consensual.

Mr. Baez’s request comes weeks after his partner, Ronald S. Sullivan Jr., stepped down, and five days after he had assured the justice he could handle the case.

Mr. Sullivan, a law professor and a faculty dean of an undergraduate house at Harvard University, came under fire by students there for representing Mr. Weinstein.

The following story A Utah Orthodox rabbi said his childhood nanny sexually abused him for 10 years. Here’s why he decided to tell his story for the first time is one we hope you will read, share, post, and repost, tweet, post to facebook, whatever.

It is written by Gillian Friedman of Deseret News. This is the first time we have posted from this source and we cannot thank Ms. Friedman enough for contacting us. We are reprinting the first few paragraphs of the story with her permission and that of the Editorial Committee of Deseret News.  We emphasize that this should not be deemed an endorsement of LostMessiah by Deseret News. We are fairly certain they don’t know much about us. We do hope that our interest in this story will open a shared dialogue.

This Rabbi’s story, as told in this piece is critical to convincing families and abuse victims to speak up. We implore you to please go to the source material and read the entire piece.  It is long. It is heartbreaking. It is courageous. It is also novel in that we have not seen a rabbi speaking out about his own experiences and doing so for the purposes of inspiring others to do the same.

Child sexual abuse within the ultra-Orthodox community is still being swept under the carpet. Rabbis are still denying that it happens; and when it does, are still insisting that it remain within the legal jurisdiction of the beit din (Rabbinical Court) and not under the scrutiny of society at large.

This story and #MeToo makes sexual abuse a public issue. This is a step in the right direction to making others within the Orthodox community follow this courageous lead.

Thank you Rabbi Zippel for your courage. Thank you Gillian Friedman and Deseret News for sharing.

A Utah Orthodox rabbi said his childhood nanny sexually abused him for 10 years. Here’s why he decided to tell his story for the first time

SALT LAKE CITY — From behind the witness stand, Utah Rabbi Avrohom (“Avremi”) Zippel gazes out into the sea of faces and prepares to speak.

It’s a dreary Tuesday morning, and normally, public speaking doesn’t intimidate the 27-year-old. Since he was a child — the precocious and prized eldest son of a prominent rabbi — he has revelled in the attention of a crowd.

But today, sitting in a courtroom in downtown Salt Lake City, the confidence that usually comes so easily evades him.

He fidgets nervously, his fingers playing with his long dark beard, adjusting his black suit and yarmulke, the traditional garb of observant Jewish men.

Time seems to slow to a stop, and all he can hear is the sound of his heart pounding in his ears. But then, one message rings clear in his head, as if from on high: you are doing the right thing.

He clears his throat, and in a voice barely above a whisper, begins to share a story that has haunted him for decades.

In a preliminary hearing Tuesday, Rabbi Zippel testified that Alavina Florreich, 69, sexually abused him for roughly 10 years — from age 8 to 18 — while she was employed as his nanny.

Florreich was arrested March 30, 2018, on suspicion of 131 counts of child abuse. She was charged in 3rd District Court in April 2018 with five counts of aggravated sex abuse of a child, a first-degree felony, and two counts of forcible sexual abuse, a second-degree felony, according to charging documents.

Florreich, in interviews taped by police, said she was teaching Rabbi Zippel to be a good husband and that it was “all part of the boy’s curiosity” and it was just him “learning,” according to a police report.

Florreich did not testify at the hearing Tuesday, and her attorneys did not respond to multiple requests from the Deseret News for comment on the case.

Rabbi Zippel said he was inspired to come forward by the #MeToo movement, in particular by Olympic gymnast Aly Raisman, who testified in court alongside 156 other women who said that former USA Gymnastics team doctor Larry Nassar had sexually abused them.

But he is also making history: Rabbi Zippel may be the first Orthodox Jewish rabbi to come out during the #MeToo movement as a survivor of sexual abuse — a topic he said is rarely discussed in the observant Jewish community.

“I think he’s a hero for speaking out,” said Elizabeth Smart, who was in court supporting Rabbi Zippel Tuesday, and who has advised Rabbi Zippel on the case in recent weeks.

What follows is an exclusive account of the story of a man who for years grappled with shame and guilt as a result of his alleged abuse, and who, in part because of his religious beliefs, was convinced he was a “terrible sinner” who was entirely to blame. He hopes that by coming forward, he can become an example not just to his own observant Jewish community, but to other survivors of sexual abuse suffering in silence.

“If I can help one person, if I can bring some sort of healing to one person by telling my story, then it’s worth it,” he said. 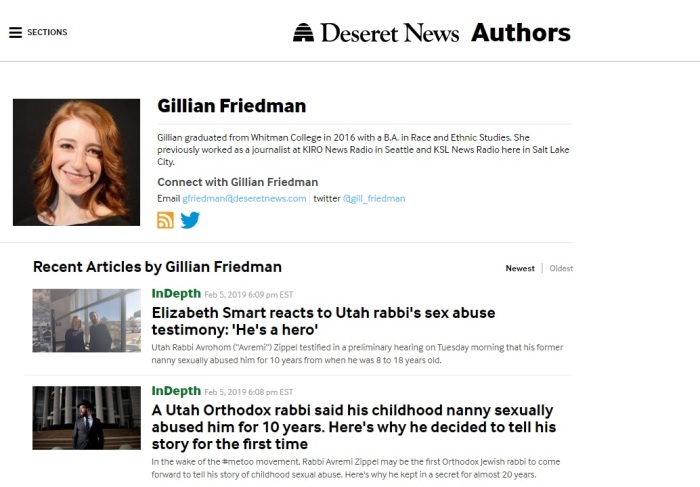