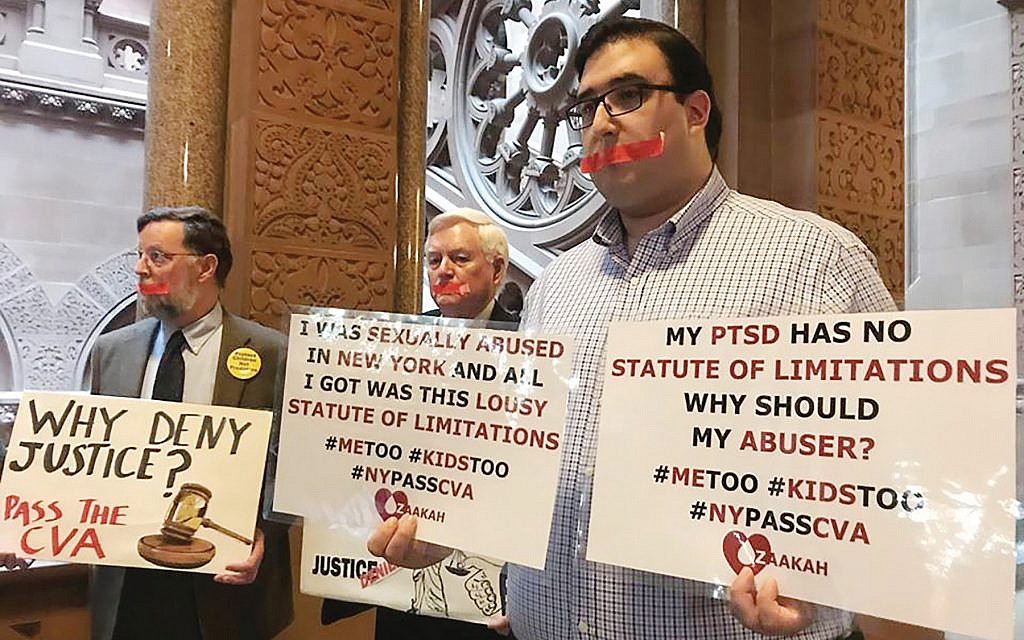 Child victims and advocates during the debate in Albany in the run-up to a vote on the Child Victims Act. Courtesy of Asher Lovy

An earlier version of this article appeared here. It has been updated below with additional reporting.

Mordechai Twersky, one of the plaintiffs in a 2013 lawsuit against Yeshiva University accusing administrators and teachers of a decades-long cover-up of physical and sexual abuse at its affiliated high school, said the flagship Modern Orthodox institution “left us for dead” after a U.S. District Court judge dismissed the suit.

Citing federal and state statutes of limitations, which had expired, the judge wrote in a decision handed down on Jan. 30, 2014, “No exceptions apply.”

As of last week, that is no longer the case.

Six months after the Child Victims Act was signed into law on Feb. 14, extending the statute of limitations for reporting sex abuse and filing lawsuits, last Wednesday marked the start of a one-year litigation window in New York allowing people to file civil lawsuits that had previously been barred by the state’s statute of limitations.

As New York courts gird for an onslaught of filings — with thousands of lawsuits expected to be filed against the Catholic Church, Boy Scouts of America and other entities in the coming days and weeks — those who say they are survivors of childhood sexual assault at Jewish institutions anticipate their day in court with a combination of disbelief and gratitude. 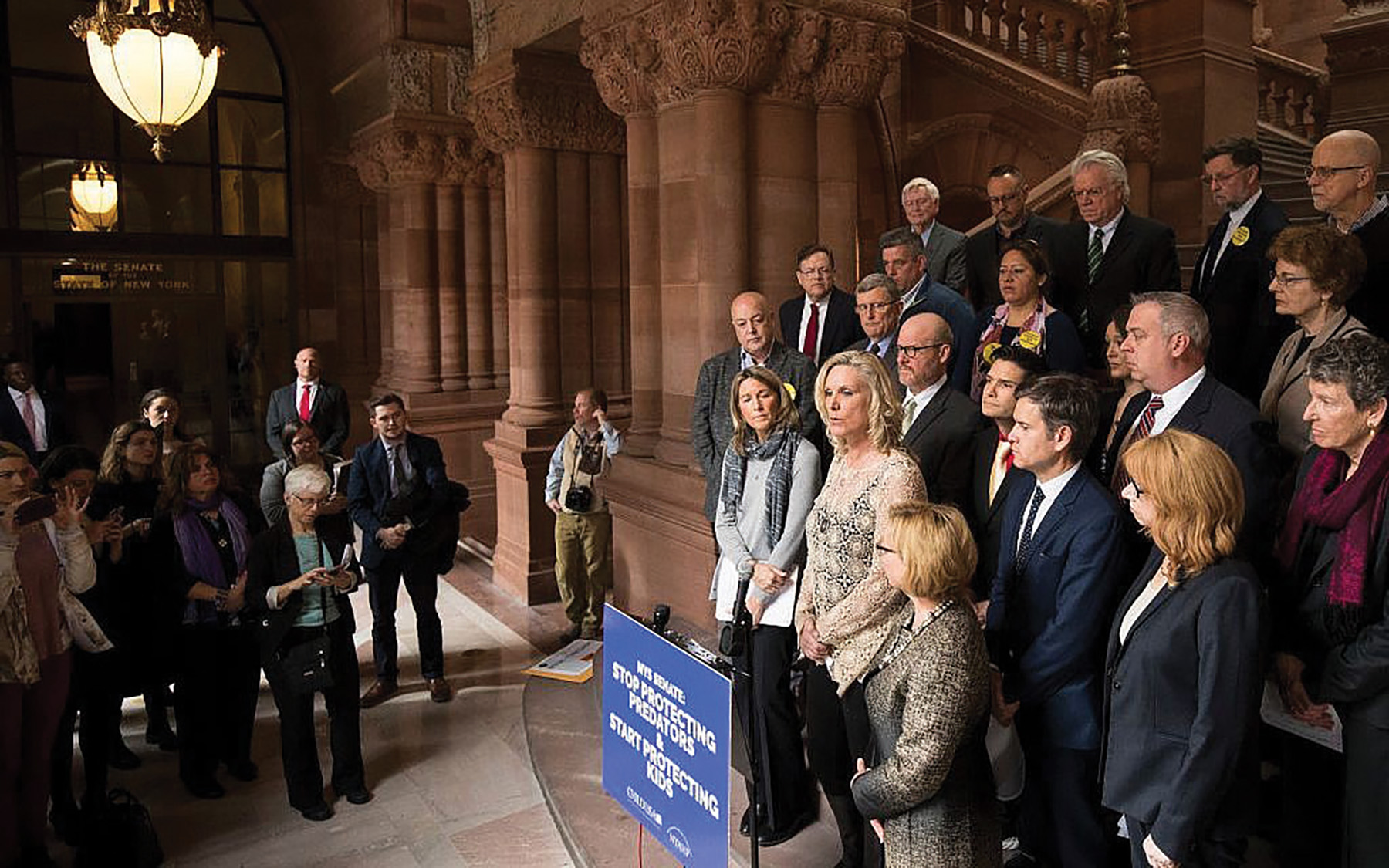 “It’s been a 38-year ordeal and counting,” said Twersky, who was among 19 former students of Y.U.’s boys’ high school, Marsha Stern Talmudical Academy (MTA), who sued the school for $380 million. Twersky said the alleged abuse against him occurred in the spring and summer of 1980. In 2014, Y.U. said in press reports that it would not comment on ongoing litigation.

Now, Kevin Mulhearn, a lawyer representing the victims, is expected to file on behalf of 40 plaintiffs against Y.U. in the coming weeks, The Jewish Week has learned.

“For decades, our clients have been denied justice, or even the opportunity to hope for justice, against Y.U.,” said Mulhearn. “The Child Victims Act will hold the complicit to account.”

A Y.U. spokesperson said last week, “Unfortunately we can’t comment at this time.”

“Somehow, I feel emboldened,” said Twersky, who said he was inspired to recite the traditional “Shehecheyahnu” blessing on the day the look-back window opened, a prayer generally reserved for momentous occasions and holidays.

“The one-year look-back window has breathed new life into our fight, and we’ll soon have our day in court.”

Twersky and other Yeshiva University plaintiffs are far from the only ones seeking redress against major Jewish institutions.

Two men who originally brought a lawsuit against the National Ramah Commission in 2016, alleging that they were sexually molested in 1971 by a counselor-in-training at Camp Ramah in the Berkshires, plan to refile the suit in the coming days, one of the plaintiffs, who wished to remain anonymous, told The Jewish Week. The case was originally dismissed in September 2018 after a judge ruled that the statute of limitations had expired on the claims of sexual abuse. 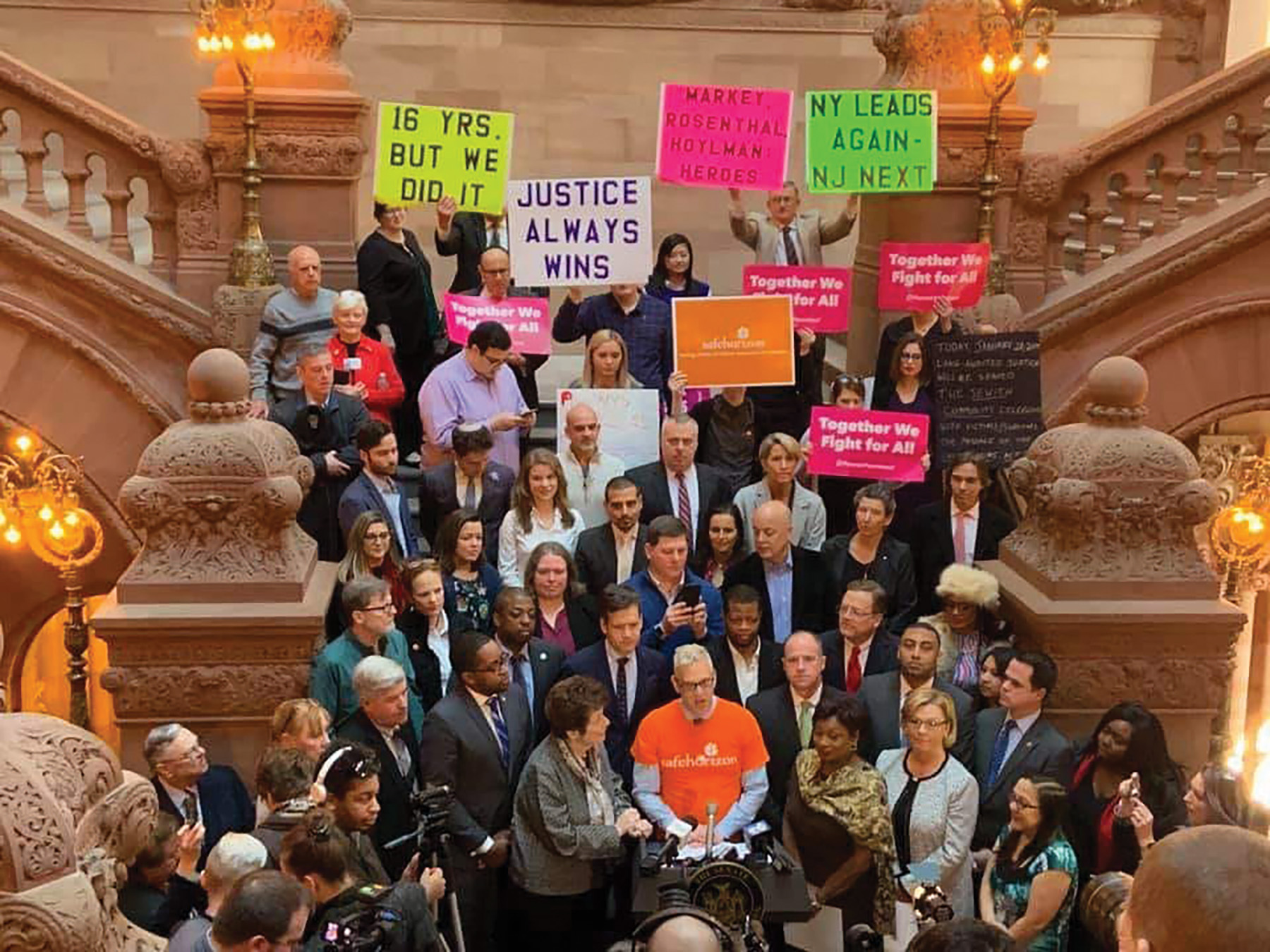 “When you’re a 12-year-old kid, you’re a victim, but you don’t have the power to do something to save yourself or prevent it,” said the plaintiff, who says he was molested by the counselor, despite camp leadership knowing about the problematic behavior and failing to act. “That’s one of the shameful things I’ve carried throughout my life: why couldn’t I have stopped it?”

Rabbi Mitchell Cohen, director of the National Ramah Commission, responded: “Our hearts go out to anyone who may have been abused as a child. Although it is our policy not to comment on any potential litigation, we reaffirm that child safety is the highest priority at all Ramah camps.”

Advocates for alleged victims of child sexual abuse in the Jewish community have employed different strategies in responding to the new Child Victims Act.

Asher Lovy, the director of community organizing for Za’akah, an organization that advocates for survivors of child sexual abuse in the Orthodox Jewish community, said he has done “everything in my power” to educate survivors about their new legal options.

“Our role has been trying to raise public awareness,” said Lovy, who has been at the forefront of lobbying for the Child Victims Act since 2016. Since the bill passed, the organization’s call volume has been “significantly up” and Za’akah has successfully organized a series of panels, webinars and presentations on the expanded options under the new law.

Still, the organization has had a “very difficult time” fundraising for advertisements that would run in Orthodox media outlets and inform survivors of their legal options, said Lovy. 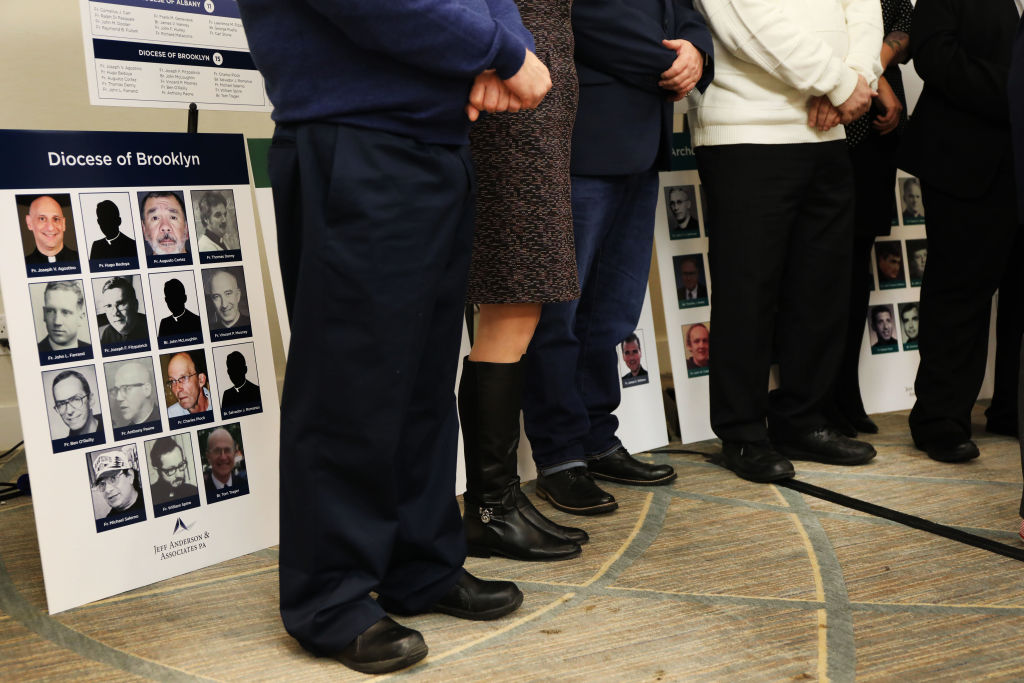 According to Zvi Gluck, director and founder of Amudim, one of the largest victim-service organizations in the Orthodox world, with an annual operating budget of $7 million, efforts not to publicize the one-year look-back provision and extended statute of limitations for civil suits were intentional, based on the organization’s prerogatives.

Gluck said the organization chose not to speak out publicly because he did not want to “risk causing secondary trauma for survivors.

“If we publicized these new legal options and survivors chose to bring their cases back to court only for those cases to be dismissed, we could cause even more trauma for survivors,” he continued.

Gluck said that if the new Child Victims Act had been in effect since his organization was founded in 2014, 37 percent of its clients would have been able to file criminal complaints against alleged perpetrators. “The issue boils down to a lot of people were first reaching out to us for help when it was too late.”

Citing that his organization prefers to work “within the community,” as opposed to mounting a public ad campaign, Gluck said Amudim caseworkers have “privately” reached out to about 1,300 Amudim clients via phone calls to let them know about expanded legal options under the new law. He said caseworkers referred clients to legal resources, including Indianapolis-based attorney Jon Little, who previously pursued cases against the U.S. Olympic sports’ governing bodies on behalf of athletes who claim they had been molested by coaches.

Reached by The Jewish Week, Little said that to date, no clients have been referred to him through Amudim, and that he was not familiar with the organization. “My staff would welcome their calls,” he said. (The other firm Gluck said his caseworkers have been referring clients to is the Boca Raton, Fla.-based Herman Law, which has not yet responded to a request for comment).

Mike Reck, a trial attorney who specializes in sexual abuse litigation, said Gluck’s concern about causing secondary trauma for survivors if a case is dismissed is “outlandish, dangerous, unconstitutional and flies in the face of children protection in the modern age.

“The possibility for a survivor to have their day in court validates what they went through, regardless of the outcome,” said Reck, who has represented hundreds of survivors of sexual abuse in cases against the Catholic Church, Boy Scouts, camps, private schools and other institutions. In the past, he has represented a handful of Jewish clients, though he recalled being “chased out of the community” when he met with potential plaintiffs from the charedi enclave of New Square, in Rockland County, three years ago.

“These Jewish communities are so insular,” said Reck, who said he is currently representing “less than a dozen” Orthodox survivors of sexual abuse, compared to 450 cases he will be filing against the Catholic Church in the coming weeks. His current caseload includes cases against Ramaz High School and Yeshiva University, he said.

Reck attributed the disparity between Orthodox survivors and Catholic survivors willing to pursue legal recourse to a “lack of education” in Orthodox communities. “People are not aware of the Child Victims Act — there is a need for public outreach there,” he said.

After the Child Victims Act was signed into law, ultra-Orthodox umbrella groups expressed fears that the look-back provision and extended statute of limitations could wreak havoc on Jewish schools, camps and other institutions.

Agudath Israel, the ultra-Orthodox umbrella group that lobbied against the passage of the Child Victims Act for years alongside the Catholic Church and the Boy Scouts of America, issued a statement shortly after the bill’s passage warning that the one-year look-back window “could literally destroy schools, houses of worship that sponsor youth programs, summer camps and other institutions that are the very lifeblood of our community.”

Orthodox leaders, including Agudath Israel’s director of public affairs, Rabbi Avi Shafrantold The Jewish Week that “fears” of a barrage of potentially crippling lawsuits from alleged victims of child sexual abuse against yeshivas and camps “are real.”

“The statements and op-eds and hand-wringing about yeshivas going bankrupt is really a coded message about religious beliefs,” said Marci Hamilton, founder and CEO of Child USA, a nonprofit that works to prevent child abuse, shortly after the act’s passage. “That message is meant for victims within their own community: Don’t tell outsiders about the bad behavior that has taken place in our organizations.”

For Yeshiva University plaintiff Twersky, now 55, the desire for justice has not waned over time.

“Quite to the contrary, my anger has only intensified with the indifference and contempt that Yeshiva has displayed toward our group of survivors in the face of our pain and suffering. It is the ultimate betrayal,” he told The Jewish Week.

The look-back window is an “opportunity for survivors to have their day in court and attain a semblance of justice,” he said. “Seize the moment.”