Leaders of the ultra-Orthodox political parties have denounced Blue and White chairman MK Benny Gantz for saying he would exclude them from government if he gets the chance to form a coalition.

Speaking on Tuesday night in Beersheva, Gantz said he would form a “liberal unity government,” without “extremists or extortionists,” widely seen as a reference to the ultra-Orthodox and right wing religious-Zionist parties.
United Torah Judaism chairman and deputy health minister MK Yaakov Litzman and senior UTJ leader MK Moshe Gafni said that “the cat was out of the bag” and that Gantz’s efforts to hide his positions regarding the ultra-Orthodox parties had now been exposed.
“After he has tried for a considerable period to conceal his opinions and even did everything to separate himself from his partner Yair Lapid, today it is clear that there is no difference between them,” said Gafni and Litzman in a joint statement to the press.

Even on Tuesday, Shas chairman and interior minister Aryeh Deri said that if Gantz and his fellow party leaders would separate from Yesh Atid and Lapid they could join a right-wing, religious government that might be formed.
But Blue and White has, over the last few weeks, been battered by Avigdor Liberman and his Yisrael Beytenu party for his reticence to underline his commitment to liberal, pluralistic values.
Whereas Blue and White obtained 35 Knessets seats in the April election, it is currently polling between 30 and 31 seats, while Yisrael Beytenu, which took just five seats in the April election, is polling between nine and ten seats.
Yisrael Beytenu rejected Gantz’s comments saying that they were part of a coordinated plan between him and the ultra-Orthodox parties and that the Blue and White leader planned to bring UTJ and Shas into a coalition which Gantz would form if he was positioned to form a government after the election.

Some 560 onshore and offshore exploration drillings have been conducted since 1948, but only 15 have yielded commercial quantities of natural gas. The failure rate is 97.3%. In high-tech, the failure rate for startups is 90% or more.

Fifth Dimension (whose other top executives included Ram Ben-Barak, a former Mossad deputy head who is also a Kahol Lavan candidate) was formed in 2014 and closed at the end of last year. Between 2012 and 2017, a total of 3,307 Israeli startups burned through $3.8 billion and closed, according to IVC Research.

Was it a coincidence that Gantz and Ashkenazi chose high-risk businesses? Almost certainly not. They both left the army with generous pensions, but they both wanted to make a bundle, and that requires taking risks. If Fifth Dimension had ended in a giant exit and Shemen with commercial amounts of gas, they would have made millions and been free to enter politics with a clear mind.

They were chosen as chairman of their respective companies for their military backgrounds, their image and their connections in Israel and abroad. They brought charisma that could open doors. Many entrepreneurs looks at appointments like these as practical business, not as needless window-dressing.

But their army careers didn’t set them up to be businessmen. As chiefs of staff they knew how to spend money, not how to earn it. Neither had a head for finance, marketing or technology. Gantz knew nothing about Fifth Dimension’s artificial intelligence technology and Ashkenazi knew nothing about the geology behind petroleum exploration.

The failure of Shemen and Fifth Dimension are now inescapable items on the two men’s CVs, but it tells us nothing about their political capabilities. What can be said is that it’s impossible to become chief of staff without good political horse sense.

They may never have held elected office, but they aren’t newbies. They’ve waged political battles over the defense budget and know how to deal with the media. The jury is still out over whether they will indeed be successful political leaders, but there’s nothing in their career path, including each one’s brief foray into business, that says they can’t be.

To read the complete article in Haaretz, click here.

Ultra-Orthodox parties to ‘unequivocally’ back Netanyahu as next PM 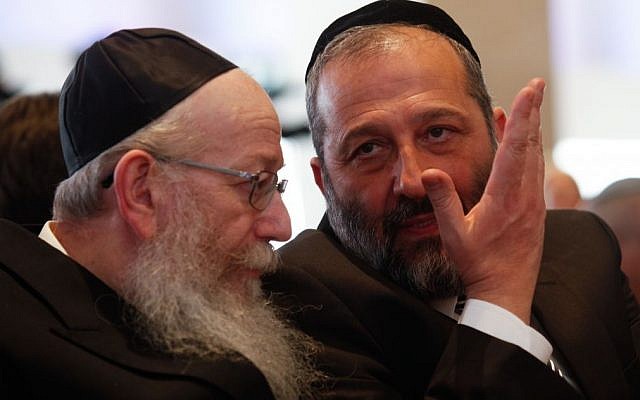 The leaders of the two major ultra-Orthodox political factions, Shas and United Torah Judaism, announced Thursday they were joining forces to ensure that Benjamin Netanyahu wins the April 9 election and forms the next coalition government.

They vowed to back Netanyahu over rival Blue and White party leader Benny Gantz.

“We continue with all our might to unequivocally support Prime Minister Benjamin Netanyahu, and not Gantz,” the two party leaders said in a joint statement after the meeting.

BENNY GANTZ – To Our Readers

The following articles are the latest information available in a series of recent articles regarding Benny Gantz, Israel’s best chance of unseating Binyamin Netanyahu. Bibi, as he is affectionately known, stands to be Israel’s longest running Prime Minister if elected again in April of 2019. He has been mired in controversy, not the last of which are the allegations that lead to the toppling of his government.

Sources close to us in Israel have advised us that in advance of registering his own political party, the Israel Resistance Party, a firm was engaged to try and dig up information on Gantz, which may have included fabricating stories intended to dirty and otherwise clean reputation.

Retired Lt. Gen. Benny Gantz has been polling favorably in recent weeks, emerging as a fresh, exciting face in Israel’s staid political landscape. By officially registering his new party, “Israel Resilience,” Gantz shakes up a snap three-month election campaign that has been widely seen as Netanyahu’s to lose.

Even before officially announcing his candidacy, several polls showed Gantz’s hypothetical party coming in second only to Netanyahu’s ruling Likud in a crowded field of contenders in the April 9 vote. A second-place finish would position Gantz for either a top Cabinet post in a Netanyahu government or to be a high-profile opposition leader.

Gantz has yet to comment publicly on the new party. Though he has yet to lay out his worldview or political platform, he flaunts stellar military credentials — a must in security-centric Israel — and a squeaky-clean image to contrast Netanyahu’s corruption-laden reputation.

Although still short of the kind of widespread support likely needed to become prime minister, Gantz’s candidacy captures a yearning in Israel for a viable alternative to emerge against the long-serving Netanyahu, who has been in office for nearly a decade and is seeking a fourth consecutive term.

With a commanding lead in the polls, and a potential indictment looming against him, Netanyahu called early elections this week, seeking to pre-empt possible corruption charges and return to office to become the longest serving premier in Israeli history.

Police have recommended charging Netanyahu with bribery and breach of trust in three different cases. Netanyahu has denied any wrongdoing, dismissing the allegations as a media-orchestrated witch hunt aimed at removing him from office.

Israel’s attorney general is now weighing whether to file criminal charges. Analysts say that Netanyahu hopes to win re-election before a decision is made, believing it would be much more difficult for the attorney general to charge a popular, newly elected leader.

Even with Netanyahu’s legal woes, he remains popular in opinion polls, while Israel’s established opposition remains splintered and unable to produce a viable challenger.

Like most retired security officials, Gantz is believed to hold moderate positions toward the Palestinians, which would set him apart from Netanyahu, who has largely ignored the issue while focusing on Iran’s influence in the region. But Gantz has been cagey about voicing his opinions, wary of alienating conservative voters crucial for a political upheaval.

Early opinion polls indicate that Gantz would take away votes from all the major parties and may not tip the scales away from Netanyahu just yet. But the emergence of the tall, telegenic ex-general with salty hair makes things more interesting, as he could spark new alliances with other moderate parties to give the hard-line Likud an honest fight.

“It’s too early to tell, but he definitely strengthens the center-left camp,” said Mina Tzemach, a leading Israeli pollster, whose most recent survey gave Gantz’s new party as many as 16 seats in the 120-seat Parliament. “He projects security and integrity. And the fact that he looks good doesn’t hurt either.”

Gantz, 59, was a paratrooper who rose up the ranks to head special operations units and other various commands before serving as military attache to the United States and ultimately becoming Israel’s 20th military chief between 2011-2015. His term was marked by two wars with Hamas militants in Gaza and a covert air campaign in Syria against Iranian arms shipments to Hezbollah guerrillas in Lebanon.

Since his discharge, he has been aggressively courted by several Israeli political parties, but ultimately decided to go it alone for now as the leader of his own party.

Despite his impressive pedigree, Gantz remains a political unknown, which explains part of his appeal in such a highly partisan climate.

“There seems to be about 20 percent of the public that is fed up with what’s out there. He appeals to those who don’t want Netanyahu but can’t bring themselves to vote for the others either,” said Reuven Hazan, a political science professor at Jerusalem’s Hebrew University. “He’s the flavor of the election.”

Israel is no stranger to such would-be saviors. In the 2013 elections, former TV anchor Yair Lapid came out of nowhere with his centrist Yesh Atid party to capture 19 seats and become Israel’s second-largest faction. Last time, in 2015, Moshe Kahlon’s economy-focused Kulanu became the unlikely kingmaker. Both, however, decided to join Netanyahu’s coalition rather than oppose him and their years in the system have taken off some of the shine since then.

To read the remainder of the article, click here.

A leading rival of Prime Minister Benjamin Netanyahu took a step toward running in Israeli elections called for April 9. Benny Gantz, the former chief of staff of the Israel Defense Forces, hasn’t declared a run for office yet, but recently he registered his own political party. The Hosen LeYisrael party will be known in English as the Israel Resilience Party. Gantz has not issued any kind of political platform or said what kind of political outlook a party led by him would have. But ex-military leaders like him have proven popular at the polls, and few long-time opposition politicians appear to have emerged from the pack of potential rivals. Several existing parties courted Gantz to run with them in the upcoming election. The center-left Zionist Union – which includes Labor – reported offered him the position of party leader. Gantz, 59, served in the IDF as a career army official. Commanding several units, including special operations units, before serving as the head of Israel’s military from 2011 to 2015.

Israel’s Knesset voted unanimously on Dec. 20 to dissolve and go to early elections. Netanyahu, the subject of corruption investigations, is still expected to be at the top of the Likud ticket. The party will hold its primary in early February.