The following is a review of the Abington of Glenview Nursing Facility: 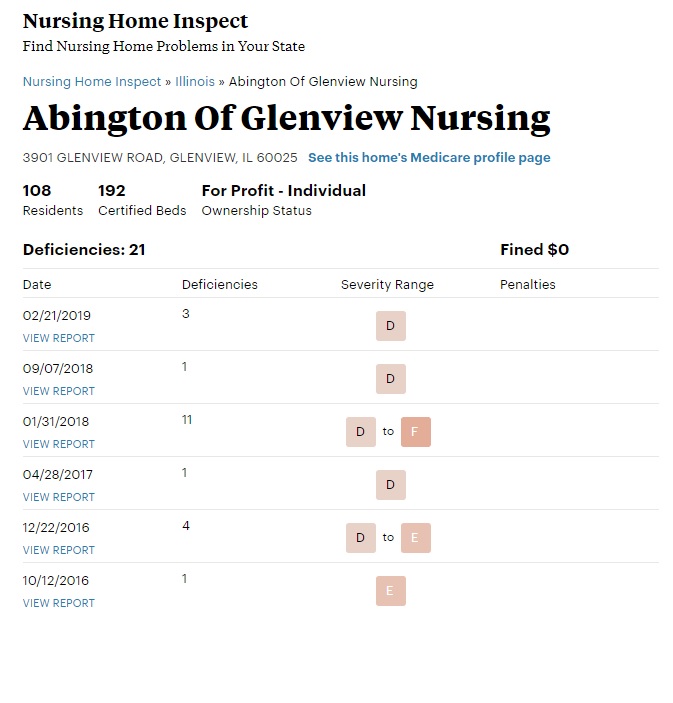 GLENVIEW, Ill. (WLS) — Two nursing home aides in north suburban Glenview have been fired and charged after a Snapchat video showed them taunting a 91-year-old woman with dementia.

Margaret Collins’ family is outraged, and taking legal action. The family’s lawsuit seeks more than $1 million in damages and alleges the nursing home, despite that video, turned a blind eye.

In the video Collins appears to be in distress, arms flailing as she pushes away a hospital gown.

“She’s waving her arms because of one reason. She doesn’t have mobility to get away. That’s the only option she has to protect herself,” said Tom Collins, her son.

Collins’ family said the great grandmother has dementia, and was known by workers at the Abington nursing home of Glenview to dislike hospital gowns.

The video of the encounter, four days before Christmas, was posted to Snapchat with the caption “Margaret hates gowns” and two laughing face emojis.

The family is now suing the Abington and the two nursing assistants, Brayan Cortez and Jamie Montesa. Cortez and Montesa are also charged with misdemeanor disorderly conduct.

“Margaret’s privacy was clearly violated,” said John Perconti, attorney for the family. “They had no right to have cell phones in there.”