Shimon Rosenfeld is accused of using millions from real estate investors, including for a Crown Heights project, for his own trading.

BROOKLYN, NY — A Brooklyn attorney who scammed real estate investors out of millions of dollars has been charged with wire fraud, prosecutors announced.

Shimon Rosenfeld, 59, was arrested Wednesday after a federal investigation into his years-long scheme, which included at least $4 million “investments” in properties in Crown Heights, Greenpoint and in Philadelphia, Pa., according to court documents.

Rosenfeld told at least four investors that he would put their money into real estate projects, but instead ended up using the money for his own trades out of a brokerage account, prosecutors said. He is charged with wire fraud and could face 20 years in prison if convicted.

“Through this alleged scheme, Rosenfeld abused his position as an attorney and betrayed his victims’ trust for his own selfish gain,” stated Acting United States Attorney Seth DuCharme. Those who commit fraud, including lawyers, must be brought to justice, and this Office will continue to work tenaciously to ensure integrity in the practice of law.” 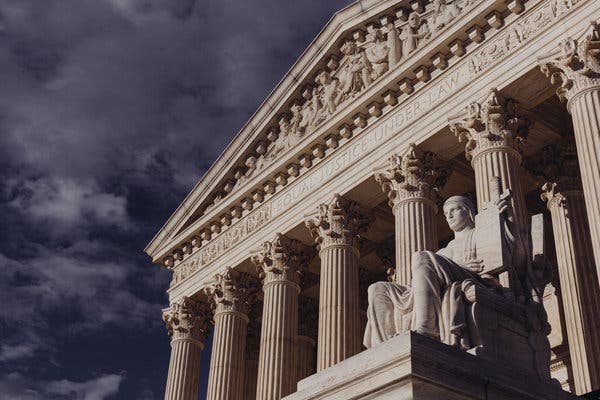 RLUIPA – Under This Law You Can Declare Your Stupidity Or Ignorance To Be Part Of Your ‘Religion’ And Claim A Benefit As Your Right.

The classical definitions of words in the English language continue to be lost as our courts lose common basic sense. How is the word ’Religion’ to be defined for the purpose of making government policies and laws? Is it any belief held by any person?

How is a ‘School’ to be defined for the purpose of ensuring that government policies and laws can be applied and public funds be expended?

Have you ever heard of the ‘Christian Identity’ religion? On what authority does the court accept that a ‘religion’ that claims to be ‘Christian’ is indeed either a ‘religion’ or that it holds to an historically recognizable ‘Christian’ theology.

QUOTE
Two Michigan prison inmates, proclaiming themselves adherents of the “Christian Identity” religion, sought the prison’s official recognition to be allowed to conduct their own worship services, apart from other inmates. The prison already recognized 20 religions, including a number of Christian denominations, but the two men said they couldn’t pray with others because their religion demanded “white separatism.”

END_OF_DOCUMENT_TOKEN_TO_BE_REPLACED

Geoffrey S. Berman, the United States Attorney for the Southern District of New York, William F. Sweeney Jr., Assistant Director-in-Charge of the New York Office of the Federal Bureau of Investigation (“FBI”), and Carl E. Dubois, Sheriff of Orange County, announced the arrest today of CHASKEL LANDAU, ALTER LANDAU, and JOSEPH NEUMAN in connection with a multimillion-dollar scheme to operate an unlicensed money transmitting business for the purpose of transmitting proceeds derived from illegal activity.  The defendants are scheduled to appear before U.S. Magistrate Paul E. Davison in federal court later today.

Manhattan U.S. Attorney Geoffrey S. Berman said:  “The defendants allegedly engaged in a brazen scheme to unlawfully transmit and conceal millions of dollars of proceeds that they believed to be derived from illegal activity.  They allegedly did so for personal profit and with the aim of avoiding law enforcement detection.  This Office is committed to rooting out such criminal activity.”

FBI Assistant Director William F. Sweeney Jr. said:  “Making money illegally is criminal in and of itself, but operating an unlicensed money remitting business, especially from outside of the United States, will almost certainly result in federal criminal charges.  Whenever someone needs to hide and move money, there’s a pretty good chance something’s afoot.  The FBI is committed to working with our law enforcement partners to ensure this type of behavior ceases to exist.”

Sheriff Carl E. Dubois said:  “We continue to work closely with the FBI and our other federal partners, and the success of this long term investigation is proof of the benefits in these relationships.  Illegal financial systems pose a great risk to our residents and their financial institutions.  Law enforcement must continue work together to deter criminals from operating and engaging with organizations that allow them to evade banking regulations.”

According to allegations contained in the Complaint[1] unsealed today in Manhattan federal court:

CHASKEL LANDAU, ALTER LANDAU, and JOSEPH NEUMAN were arrested following an FBI sting operation.  As alleged, from approximately in or about September 2014 to in or about August 2016, CHASKEL LANDAU, ALTER LANDAU, and JOSEPH NEUMAN engaged in a series of conversations and meetings with a confidential witness (the “CW”).  In order to induce the CW to invest approximately $6 million in property owned by CHASKEL LANDAU and his family, the defendants agreed to receive and transmit what they believed to be millions of dollars of funds that the CW had illegally obtained from his business.  The defendants agreed to conceal the source of the CW’s money by transmitting the CW’s money to third parties, with the expectation that it would be returned to the CW, in return for a 10% “fee.”

The scheme was two-pronged.  First, the defendants agreed to take cash from the CW, exchange the cash for checks written from real estate companies controlled by JOSEPH NEUMAN, and make the checks payable to a third party bank account purportedly controlled by the CW.   Second, the defendants agreed to use charitable organizations under their control to transmit the CW’s overseas money into the United States.  Over the course of the conspiracy, the defendants transmitted approximately $500,000 of what they believed to be stolen property, and agreed to transmit approximately $6 million total.

The maximum potential sentences are prescribed by Congress and are provided here for informational purposes only, as the sentencing of the defendants will be determined by a judge.

This case is being handled by the White Plains Division.  Assistant United States Attorneys Mathew Andrews and James McMahon are in charge of the prosecution.

The scheme, which centered on the neighborhood of Bedford-Stuyvesant, was first laid out in a BuzzFeed News investigation.

Five real estate investors whose business was the subject of a major BuzzFeed News investigation were arrested this week for allegedly defrauding lenders and taxpayers out of millions of dollars in a scheme that targeted New Yorkers at risk of foreclosure.

The US Attorney’s Office for the Eastern District of New York charged the men with conspiracy to commit wire fraud and bank fraud.

Two years ago, BuzzFeed News revealed how this group of investors turned properties on the brink of foreclosure into million-dollar listings sold on the reality TV show Million Dollar Listing New York.

Amid the lingering effects of the mortgage crisis, Iskyo “Isaac” Aronov and his four partners located homeowners in rapidly gentrifying neighborhoods who owed more than they could pay. The partners negotiated with banks to let the property go for far less than market rate, a process known as short selling. Then, with the original owners gone, the partners performed fast gut renovations, installing modern fixtures and marble counters, and resold the homes for north of a million dollars.

Prosecutors this week said Aronov and his team, which controlled every aspect of the short-selling process, traded on “false, misleading and incomplete” information, lying to the government and to lenders like Fannie Mae and Freddie Mac, failing to disclose unauthorized payments and their business relationships. BuzzFeed News linked the group to nearly 240 homes.

“As alleged, the defendants defrauded mortgage loan holders out of millions of dollars, with taxpayers saddled with much of the loss,” Richard P. Donoghue, United States attorney for the Eastern District of New York, announced.

In the process, the partners helped fuel the rapid gentrification of brownstone Brooklyn, displacing black and Latino families who in many cases had lived there for decades, and repopulating the area with young, mostly white professionals.

“What makes their alleged crimes even more egregious was their artificial devaluation of properties that, when resold or ‘flipped,’ resulted in large profits,” said Special Agent in Charge Christina Scaringi of the US Department of Housing and Urban Development’s Office of Inspector General, one of several agencies involved in the investigation. “Many of these homes were located in economically challenged areas of New York where affordable housing is at a premium.”

The indictment comes amid a larger crackdown on predatory real estate investment targeting New Yorkers who remain in foreclosure, dubbed an “epidemic of fraud” by an investigative grand jury last year. At least 20 people have been convicted in alleged scams. New York state also passed legislation this year meant to better protect homeowners who had been the target of predatory investment or fraud.

BuzzFeed News found at least 12 lawsuits in which borrowers said they had been deceived by the group.

In some cases, homeowners said the investors got them to sign over the deeds to their homes before the sales went through, claiming it was a normal part of the short-sale process. That gave the investors leverage to pay less, because no one else could buy the house — but this left some homeowners, like Denise Riera of the Bronx, on the hook for mortgages to homes they no longer owned.

Aronov appeared in court in Miami and his bond was set at $500,000, according to court papers. The four other men were arraigned in Brooklyn. Two of them also were released on bond, including Michael Herskowitz, a 40-year-old Brooklyn lawyer.

Since 2015, Herskowitz has been implicated in at least two other schemes targeting borrowers in foreclosure in Florida and Queens. He paid a $281,000 settlement in the Florida case and pleaded guilty to a disorderly conduct violation in the second.

Herskowitz’s attorney declined to comment for this story, citing the ongoing case. Neither Aronov’s attorney nor those for the three other defendants, Michael Konstantinovskiy, Tomer Dafna, and Avraham Tarshish, replied to requests for comment.