Skip to content
HomeHaredim, Not Ultra-Orthodox, A Linguistic Change and “Otherness” 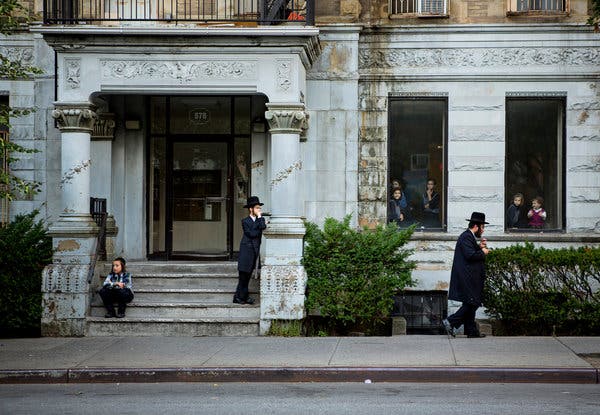 Valid Point, Ultra-Orthodox May be Derogatory. Thanks for the Clarification – But Which Jew is the “Other”?

We have been using the term Ultra-Orthodox since this blog’s inception, primarily because Hared, Haredi or plural Haredim are Hebrew words; and because knowing the difference between those who view themselves as “Hasidim” and those who do not is simply too hard to define. We have not intentionally been trying to offend, demean or place any group into the category of an “other”. When we have referred to radical – we have used the term “radical” or “fundamentalist”.

However, the point of the opinion below, posted in the NY Times is very valid and we thank Avi Shafran for pointing out something many of us did not know. We also apologize for the offense.

As to his comments about the “bloc” however, we beg to disagree. The Haredi community tends to vote as a bloc, at least in Rockland County, New York, Lakewood, New Jersey, London, England, throughout Israel, and in other areas where there are a large population of Haredim living together. The numbers speak to that point. We therefore believe that to take offense to the term “bloc” is hyper-sensitive. A voting bloc is a function of mathematics and nothing more.  That said, we are not Haredim so far be it for us to judge; and we will do our best to respect the sensitivity.

There is one thing we would like to point out to Mr. Shafran, for whom we have the utmost respect. The Haredim have chosen to live together in highly exclusionary communities. For the most part in areas like New Square, New York, and Kiryas Joel (n/k/a Palm Tree, New York) outsiders are wholly and entirely unwelcome into those communities. The people who have chosen to make a modern-day Shtetl out of a community cannot then complain about the lens from which the “outsiders” – everyone else –  view them, namely as others. That is not anti-Semitic. It is a function of feeling like a bean in a bag of rice.  Moreover, many of us feel an non-Haredi subtle “otehrness.”

We would argue that in many circumstances the rest of us, particularly those of us who are Jewish but do not view Judaism by clothing and shoe-tying rituals, are actually the “others.”

Just something to think about.

We wish every Jew a Shabbat Shalom on this the “Rosh Hodesh” (first of the month) of Adar.

Mr. Shafran is the director of public affairs for Agudath Israel of America.

“Ultra-Orthodox” is a label that should be retired.

In the spring of 2016, President Barack Obama signed a bill eliminating dated references to racial or ethnic minorities that had remained in parts of federal regulations. “Negro” would be replaced with “African-American,” “Oriental” with “Asian-American or Pacific Islander” and so on. It was a long-overdue recognition that the meanings that words carry matter — especially when applied to minority groups.

It’s now generally accepted that racial, ethnic and religious groups determine how they wish others to refer to them. This is true not only in government documents but also in popular media and polite conversation.

There’s an exception, though, applied to my group — a different standard. We’re constantly labeled “ultra-Orthodox,” against our wishes.

We’re your neighbors, recognizable by our men in dark suits and black hats (for the subset among us called Hasidim, fur hats on the Sabbath and holidays), our women in modest dress and wigs or with kerchief hair coverings.

We oppose the label “ultra” as anyone would. What does “ultra” bring to mind in, say, politics? Does “ultraconservative” conjure images of Ambassador Nikki Haley and John McCain, or of Pat Buchanan and Steve Bannon? What do we mean when we call an investment “ultra-risky”? Or a race an “ultra-marathon”? We mean something that is extreme, beyond normal or beyond the mainstream.

But that doesn’t make us extremists. We don’t rail against others and have no plans, as some religious extremists do, to harm or impose our will on anyone. We’re Orthodox, religiously observant Jews, but no more “ultra” than a typical observant Catholic, Mormon or Muslim.

Being tarred with the prefix “ultra” is only part of the problem. We’re demeaned in other ways, too. Enjoined by our faith to travel on the Sabbath only on foot, HarediJews tend to live near their synagogues, and what naturally results are Haredi neighborhoods and communities.

Why, when we buy homes in new communities, are we so often portrayed as invaders? We fully understand that the character of a neighborhood changes when members of a new ethnic or religious group arrive. We’ve been there ourselves. But no one should be able to discriminate against us in the home-buying process.

6 thoughts on “Haredim, Not Ultra-Orthodox, A Linguistic Change and “Otherness””