Skip to content
HomeWeinstein Trial -The Public Tentacles of a High Priced Defense Team – and Is a “Transactional Encounter” a Choice?

When the Most Powerful Man in Hollywood Tells you Sex is the Currency, is There Really any Choice?

Seven men and five women are in the process of deliberating on the charges against Harvey Weinstein. It is alleged by the defense that “regret” has been “renamed as rape” by the accusers (view here). We wholly disagree. As a point of full disclosure, this is the opinion of a random blogger who has had no contact with anyone in the case. It should be viewed as nothing more.

The below article from the NY Times and the follow-up additional reading are hard to wrap one’s head around. There should not be a world where sex is currency. The professional lives of women should not be judged on sexual prowess. In Weinstein’s world, he was the power-broker, the gatekeeper, the Don. This was far greater than a job interview and the allegations against Harvey Wenstein should be viewed in the context of the world in which he behaved. Sexual favors should not have been an available currency for him nor should they be for any employer in any profession.

Moreover, if women believe that the “sex-as-currency” defense is how high-priced defenses are allowed to play out in court, how many will keep quiet to avoid the ridicule going forward?

Harvey Weistein was brilliant in his professional life, the creator of a phenomenon, particularly for those of us who love movies, cherish the escape and can readily relish in a day of one movie after another. That talent and vision cannot be taken away or taken lightly. With great power comes great responsibility. He had young actresses’ dreams in his hands. He should have treated them with care, treaded lightly. The problem with this entire case is that he was flippant with dreams and willing to exploit the vulnerable; and his defense is trying to decriminalize that and make it “okay.” In our opinion that is a mischaracterization and unacceptable.

The price many women had to pay to be a part of Weinstein’s incredible art was far too high, not a choice between “yes” and “no” a choice between acting a giving up the dream. Did those women really have a choice if they wanted to act?

Harvey Weinstein knows the sex was not consensual even if it was not forcible; and for some it was forced.  The underlying structure of the word “choice” in his world is laden with the notion of duress, and laced with Weinstein’s status as the visionary. We hope the jury can see his actions for what they were, pressure to perform sexually if an actress ever wanted a place in Hollywood. That is not consensual sex.

In the interest of full disclosure, the prosecution team has had nothing to do with the publication of this opinion, an alternate plea to the jury, to give the victims justice.

Harvey Weinstein was Hollywood. He was the embodiment of what it meant to become an actress. He was the authority of what was good or bad. He had the power to decide who could live or who could die (figuratively speaking) in the field of acting. Getting past the Weinstein gatekeeper was not a choice. And if that “transaction” was the price of stardom, it was not consensual but manipulated, almost like drugging a date who decided to take a drink but did not realize that drink was laced with MDMA.

Aspiring actresses live and breathe their professions. It is a different thing for a female attorney, securities trader or CPA. We have transcripts, writings, reports that we can submit to prove our worthiness, our talent. We have bar exams to pass. Series exams to overcome. We are not screen-tested. Our success or failure is mathematically quantifiable. We choose to take the bar exam or the Series 7 exam but we can do it with our clothes on. And the examiners do not have the power to have us blacklisted if we fail, if it takes a few times to pass or if we do not score well. There is an objective measure of our talent and then success is generally ours to own. That is a choice.

The film industry is a wholly different animal. Everything is subjective. In Weinstein’s case, his opinion mattered.  It did not only matter to him. He had the power to make or break an aspiring actress, the power to blacklist, the power to create and destroy. That is not a mere choice of “Yes” or “No”. And, according to at least one victim, he used that power to excess.

Unlike other professions, acting is as much a craft as it is an artistic endeavor.  But to master that craft, the artist must give of herself, must be vulnerable, must be open to some form of exploitation, whether it’s looks, or shape or figure or voice. That’s a wholly different reality in professional terms. But sexual exploitation should not have been an option, a part of the equation. Weinstein created an environment where the rules of the game were different, unacceptable, manipulative; and they were his rules.

Weinstein’s attorneys are using the argument that sex as a currency was a choice, that this is the difference between immoral and criminal behavior. It was not. Being cordial to one’s attacker does not diminish the attack. It speaks to the strength of the victim not the weakness of the narrative.

Harvey Weinstein was so much the visionary that the lens from which he viewed people, aspiring actresses, was often the standard measure from which others viewed those same actresses; and he knew it. He manipulated reality and preyed on the dreamers. He laced the proverbial drinks.

One can only imagine what it took for some of Weinstein’s alleged victims to succumb to Weinstein’s demands so as to be viewed through his eyes. But was that trade really consensual if not making the trade had the power to destroy the dream?

For the women who claimed to have been forcibly raped, one can only imagine what it took to get past Weinstein’s efforts to chill speech in order to speak out and tell their stories. This was not a trade – sexual favors in exchange for a chance at stardom. Sex was not a chosen currency it was manipulated as a dream-catcher.

Aspiring actresses, for whom film is/was the lifelong dream, had no choices if they wanted to make it into the profession. They had to drink. Sex with Harvey Weinstein was not a choice.

The bar exam is a choice. Sex is victimization.  Harvey Weinstein was not a bar-examiner. He, in this blogger’s opinion, was a predator.

The film producer’s lawyer urged jurors to do “what they know is right,’’ prompting the prosecution to complain of jury tampering. 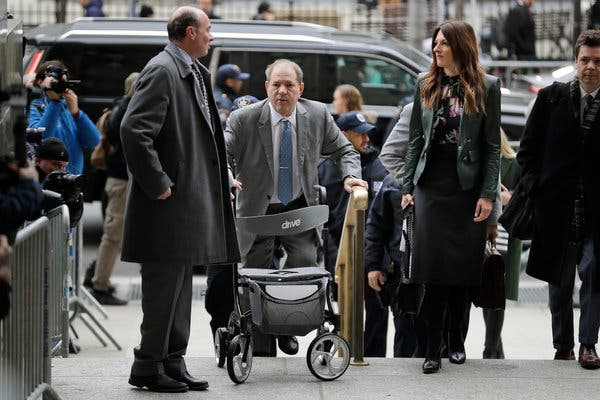 Over the weekend, just days before jurors in the Harvey Weinstein case were set to begin deliberations, his lead defense lawyer, Donna Rotunno, wrote an opinion piece imploring them “to do what they know is right.”

The judge ordered the defense team not to speak to the news media until after a verdict is reached.

“Defense team you are ordered to refrain from communicating with the press until there is a verdict in the case,” Justice James M. Burke told Mr. Weinstein’s lawyers. “I would caution you about the tentacles of your public relations juggernaut.”

The jurors were not in the courtroom at the time. As in many high-profile cases, jurors have been reminded every day by the judge not to follow any news media coverage of the case.

Weinstein’s Lawyer Says Accusers Had a Choice in Sexual Encounters

A lawyer for Harvey Weinstein told jurors on Thursday that he was the victim of an “overzealous prosecution” and that prosecutors were acting like moviemakers, inventing an alternative world in which women are not responsible for their own behavior.

During a five-hour closing argument, the lawyer, Donna Rotunno, argued that Mr. Weinstein’s accusers had chosen to engage in consensual and often transactional relationships with him to advance their own careers.

6 thoughts on “Weinstein Trial -The Public Tentacles of a High Priced Defense Team – and Is a “Transactional Encounter” a Choice?”