Skip to content
HomeDelays, Delays, Delays… Malka Leifer, Judge Lomp Do you Think Her Victims Get to Delay Their Nightmares? 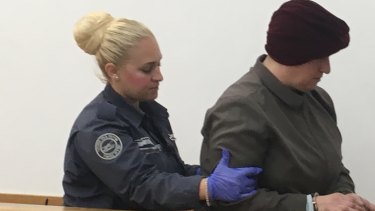 Jerusalem The Jerusalem District Court has ruled that a new psychiatric report is needed to assess if former Melbourne school principal Malka Leifer is fit to face an extradition trial over child sex abuse allegations.

Judge Chana Miriam Lomp on Monday presented a distant deadline of December 10 for the new assessment to be filed by three psychiatrists, in order for the court to decide if Leifer is truly mentally unfit, or faking her illness.Now at hearing 57, the case to try and bring the former principal of the Ultra- Orthodox Adass Israel school in Elsternwick in Melbourne’s south-east back to Australia to face 74 charges of rape and child sex abuse has met countless delays.

Judge Lomp in court said the evidence she had seen hadn’t reached a significant benchmark to automatically state that Leifer had been feigning her illness and therefore was fit enough to face justice.

Manny Waks, chief executive officer of the child sex abuse prevention group Kol v’Oz, said after the hearing that the decision was the “worst-case scenario”.

“It leaves the entire case in limbo and it’s just prolonging the pain and suffering to Leifer’s alleged victims,” Waks said.

Dassi Erlich, one of the survivors of Leifer’s alleged abuse who has been fighting to bring Leifer back to Australia for eight years, said the ruling left her feeling defeated.

In five years of court hearings, 30 psychiatrists have already been involved in determining if Leifer is fit to face extradition trial.

“How is this not enough? How many more psychiatrists need to weigh in? How much more emotional pain?,” Erlich said after the hearing.

“We are defeated but we will not give up.”Erlich and her two sisters intended to travel to Israel from Melbourne for the court hearing but cancelled their plans due to the continual and exhausting delays in the justice system.”We’ve decided to push off our trip to Israel and reserve our energy until there is more certainty regarding next steps in this long process,” Erlich announced earlier in the month.

Allegations of child sex abuse were first raised against Leifer in 2008.

The continual delays in court and the findings that Israel’s Deputy Health Minister Yaakov Litzman acted to have medical assessments altered in Leifer’s favour has raised question marks around Israel’s judiciary.

2 thoughts on “Delays, Delays, Delays… Malka Leifer, Judge Lomp Do you Think Her Victims Get to Delay Their Nightmares?”