Skip to content
HomeLakewood, NJ and an Expose – Who is Imposing Views on Whom and Is it Anti-Semitism or Justified Resentment? 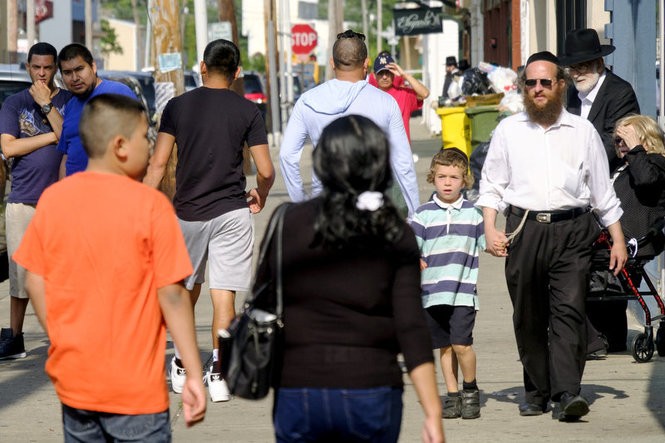 Race, religion, corruption and politics: A guide to the crisis in Lakewood

Lakewood is home to a huge Orthodox Jewish community and the rapid growth has engulfed the town, igniting tensions between the religious and secular societies on many levels.

Each day, we will explore some of the major issues in the community, including the welfare fraud investigation, housing problems and the strains on the education system.

LAKEWOOD — The drive into Lakewood from the Parkway could be confused with any other stretch of county road near the Pinelands. There are farm stands, strip malls, modest neighborhoods and an occasional open field.

Then, you cross the border into Lakewood and the landscape changes immediately. There are suddenly crowded townhouse developments, new multifamily houses going up and members of the Orthodox Jewish community on every sidewalk.

What makes it unique is the unprecedented growth of the town combined with the complex issues surrounding the booming Orthodox Jewish community.

While tensions have been rising in Lakewood for years, the turmoil has escalated in recent weeks with a showdown over school funding and a high-profile welfare fraud investigation.

The town thrust into the spotlight this summer with the arrest of 26 members of the Orthodox community accused of lying about their income to collect more than $2 million in public assistance.

The arrests brought renewed attention to Lakewood and highlighted what residents of the Ocean County town already know – Lakewood is changing. This once-faded resort community has become the most complex town in New Jersey.

Lakewood is booming. Thanks to an influx of Orthodox Jews, it has been New Jersey’s fastest-growing town over the last 20 years. It has one of the highest birth rates in the world. Housing is going up at an unprecedented pace.

“It’s probably the most attractive place in the United States today for a young Orthodox Jewish family,” said Rabbi Aaron Kotler, one of the leaders of the Orthodox community. “That’s a phenomenon that certainly didn’t exist when I was growing up, 20 or 30 years ago. But it’s a reality today.”

Why are there so many Orthodox Jews in Lakewood?

Lakewood had long been a popular resort for Jewish vacationers when a refugee rabbi fleeing Nazis in Lithuania arrived in the 1940s to start Beth Medrash Govoha, a higher education institution where men could study the Talmud, one of the religion’s sacred text.

The yeshiva, known as BMG, grew over the years into one of the largest schools of its kind in the nation, with more than 6,500 students. A thriving Orthodox Jewish community grew around the yeshiva, which included many Jews from Brooklyn’s Orthodox community looking for less costly housing and a more suburban setting to raise their families.

Who else lives in Lakewood?

The town is 84 percent white, 17 percent Hispanic and 4 percent black, according to the U.S. Census. There is a growing Mexican immigrant community and a large community of seniors in sprawling retirement communities, including Leisure Village. The African-American community has been shrinking in recent years.

The downtown is a microcosm of the 25-square-mile town. In one stretch of Clifton Avenue there is a kosher Chinese food restaurant, a Pentacostal church and a Mexican taco restaurant where the workers only speak Spanish.

Minivans full of children stop in front of the Orthodox-run frozen yogurt shop, just blocks from where Mexican immigrant day laborers gather to be picked up for day jobs. Leisure Village, the sprawling gated retirement community, is a few miles south.

What makes the Orthodox population in Lakewood different from other Jewish communities?

Most of the members of the Jewish community in Lakewood practice Haredi Judaism, a form of the religion that tries to strictly observe Jewish law, rejects some aspects of modern culture and maintains strict modesty rules that keep men and women separate in many public areas. Its members are often referred to as ultra-Orthodox, though some consider the term offensive.

2 thoughts on “Lakewood, NJ and an Expose – Who is Imposing Views on Whom and Is it Anti-Semitism or Justified Resentment?”