Skip to content
HomeLieberman, a Stand Against Israel’s Transition into a Fundamentalist and Financially Unsustainable Country 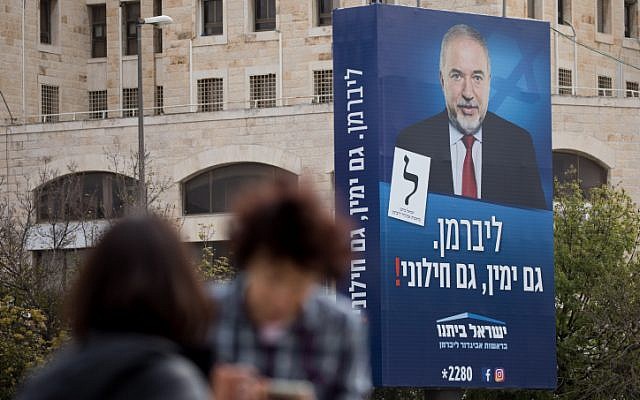 Hardline ex-defense minister has relied on support from Russian-speaking Israelis, but polls show his refusal to capitulate to demands of religious parties is widening his appeal

AFP — In a former hotel turned social housing building for elderly Israelis from the former Soviet Union, one politician remains more popular than all others.

At the “Diplomat” building housing more than 400 people in southern Israel, residents call the ex-defense minister Yvet, the Russian version of his first name.

He has done so in part with his stand against ultra-Orthodox Jewish parties, which he accuses of seeking to force religious law onto Israel’s secular population.

He has also been seeking to end exemptions for the ultra-Orthodox from performing mandatory military service like most other Jewish Israelis.

In many ways, Liberman is the reason Israel is holding another election only five months after the polls in April, unprecedented in the country’s history.

Prime Minister Benjamin Netanyahu’s Likud party along with its right-wing and religious allies won a majority of seats in April, but Lieberman prevented his old nemesis from forming a coalition.

‘Only one who fights’

Liberman refused to agree to a coalition deal that did not include legislation that would seek to have the ultra-Orthodox serve in the military.

That was a deal-breaker for the ultra-Orthodox parties, which would have been an important part of the coalition.

Netanyahu opted for fresh polls rather than risk the possibility of President Reuven Rivlin selecting someone else to try to form a government.

And he harshly criticized Liberman, who headed the premier’s office during Netanyahu’s first term in the 1990s.

Liberman resigned as defense minister in November over a Gaza ceasefire deal that he called a “capitulation to terror.”

Most of Israel’s Russian-speaking population arrived in the 1990s, and those with origins in the former Soviet Union now make up some 12 percent of the country’s nearly nine-million-strong population.

ermononok said Liberman “is the only one who fights the special treatment the ultra-Orthodox get” from the state — echoing a common complaint from secular Israelis.

They “don’t work, don’t serve in the army, receive child benefits and all sorts of discounts in transportation, municipal taxes and education,” the former nurse said.

“Other Israelis, including the Russians, work like crazy, pay their taxes and send their children to combat units.”

Ultra-Orthodox men have been exempted from military service to devote themselves to religious studies since the creation of Israel in 1948 when there were only a few hundred to enjoy that privilege.

4 thoughts on “Lieberman, a Stand Against Israel’s Transition into a Fundamentalist and Financially Unsustainable Country”