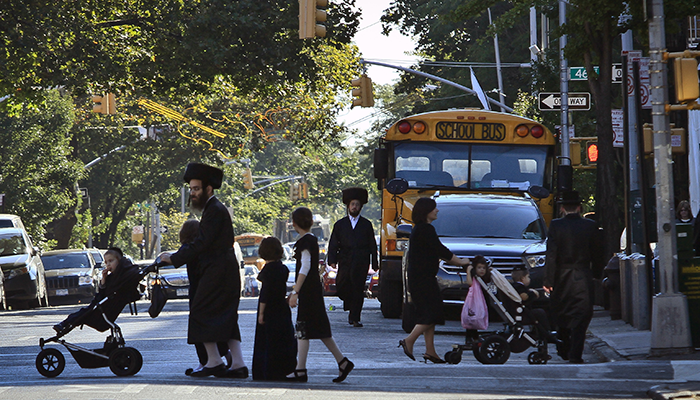 The following is via Politico:

Mayor Bill de Blasio is turning to reliable allies in New York City’s Orthodox Jewish community as he scrambles for debate-qualifying donations to his presidential bid.

A fundraising request for 10,000 donors giving just $1 each is circulating online and on WhatsApp — an encrypted messaging app — among those in the Orthodox Satmar sect, which is prominent in Williamsburg, Brooklyn.

The message, written in Yiddish and translated for POLITICO by three different people fluent or conversant in the language, acknowledges the mayor’s long-shot chances. It says it is not a request to support his White House bid, but rather to help him qualify for the September debate.

Failing to secure a spot on the national stage would be a blow to his struggling campaign.

The pitch also implies the donations would yield favorable treatment in the future.

It opens with a donation request on behalf of those “who work together with the faithful askanim [loosely translated to influential people] who are in constant contact with the government to lobby on a number of issues on behalf of our holy institutions and communities and for individuals who need help and to represent your interests,” according to one translation from a fluent Yiddish speaker.

It says the mayor “personally asked” for the support and then asks donors to extend the request to their wives and adult children.

“By donating the dollar you support your needs, the entire ultra-Orthodox public and our rights and needs by answering the call of askanim who need to show that the public recognizes those who understand our interests,” it reads.

Finally, it notes, “with the dollar you do not support his candidacy but you can help get him to the debate.”

De Blasio needs to show the Democratic National Committee he has raised money from 130,000 individuals in order to qualify, and as of his campaign filing this month, he only had about 6,700.

The message, shared with POLITICO by two people involved in Jewish politics who declined to be named, was signed by people they identified as Satmars.

The sect is divided into two factions, based upon loyalty to brothers locked in a succession feud following the death in 2006 of their father, prominent rabbi Moshe Teitelbaum.