Skip to content
HomeIsrael and the Most Radical of Its Ultra-Orthodox – In Pictures, Those who will be in their Pursuits Israel’s Undoing

Because while Muslims are learning the Koran (the sacred book of Islam), which Muslims believe is the “actual word of G-d”, they are also learning to be soldiers, to speak other languages, the importance of education and how to function within their own society.

Fundamentalist Muslims, in contrast to radical Jews, understand the importance of education. To even the most religious, there is a power to knowing the languages of one’s neighbors and his laws.

To even the most educated of Koran scholars, there is a strength in learning to fight in an army, to learning to defend one’s land.  Moreover, unlike the most fundamentalist Jewish Israelis, who have the audacity to live in Israel, accept Israeli social services and social healthcare, but would be more than happy to hand over the land to Israel’s many enemies, the most fundamentalist Muslims in the surrounding countries are nationalistic as much as they are religious.

The governmental authorities in Islamic countries would not be tolerant of the behavior that the government of Israel permits. And there is a wisdom in that for Israel’s surrounding Arab neighbors.

When Israel’s fundamentalist Jews gain a majority in Israel, parliamentary control and a religious rule of law, which the numbers tell is an inevitability, Israel will be wholly unable to defend itself and its destruction will be imminent. On the one hand, Israel’s most radical want all Israelis to be radicalized. On the other, were that to happen, who would defend Israel against its neighbors? While Israel’s most radical are burning flags and soldiers in effigy, they are doing no more and no less than playing into the hands of Israel’s far wiser neighbors. When Israel’s government permits the most religious to occupy its land without participating in Israel’s army, Israel is making itself vulnerable, at the expense of the secular society that at some point will be powerless to defend against its neighbors.

The following is a photo-essay of Israel in pictures. In our view it is emblematic of  the greatest danger to Israel, the danger of the radical forces within Israel proper.

Out of respect for those photographed, we have not posted the article below in its entirety. We only took pieces. Some of the pictures are not with the captions in the original article. We therefore encourage you to click on the link and view the photo essay as it was intended. We believe it is extraordinary.

We have posted without permissions and our posting the below should not be viewed as an endorsement of this site by the authors of that article or their blog.  It should also not be presumed that they would have come to the same conclusions we have. They may feel quite differently.

We ask that you draw your own conclusions.

In pictures: The ultra-Orthodox Jews who back Palestine 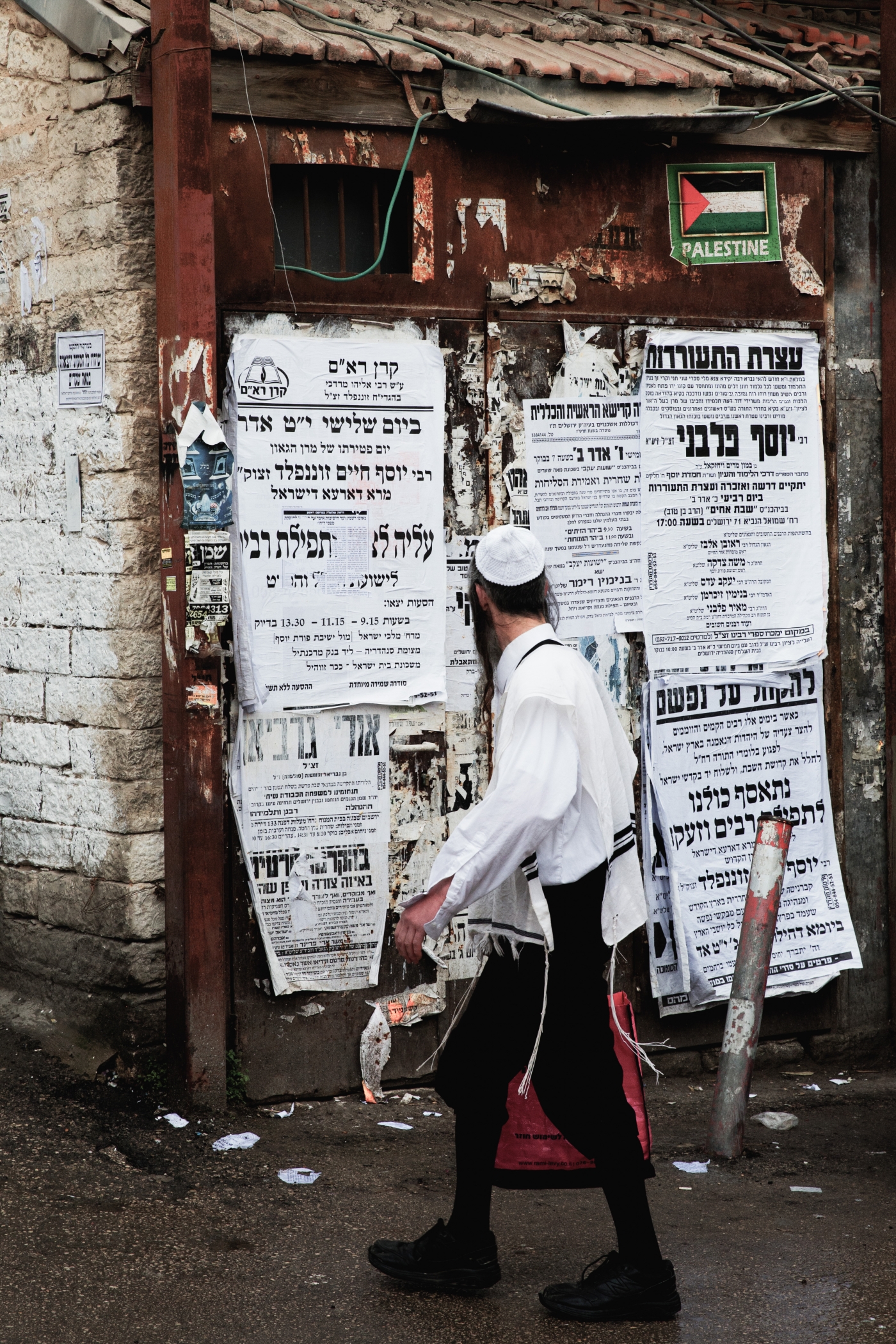 The neighbourhood of Mea She’arim, built in 1874, is near the Old City of Jerusalem (it is named after its “100 gates”). Today its narrow streets are a stronghold for the Haredim, ultra-Orthodox Jews, whose name means “God-fearing” in Hebrew. Men wear long black coats, their hair styled in side curls known as “peiyes”: women wear long skirts. Alarmed by the modern world, the Haredim refuse assimilation, sticking to halakha, traditional Jewish law: the neighbourhood can seem inhospitable to outsiders (MEE/Laurent Perpigna Iban) 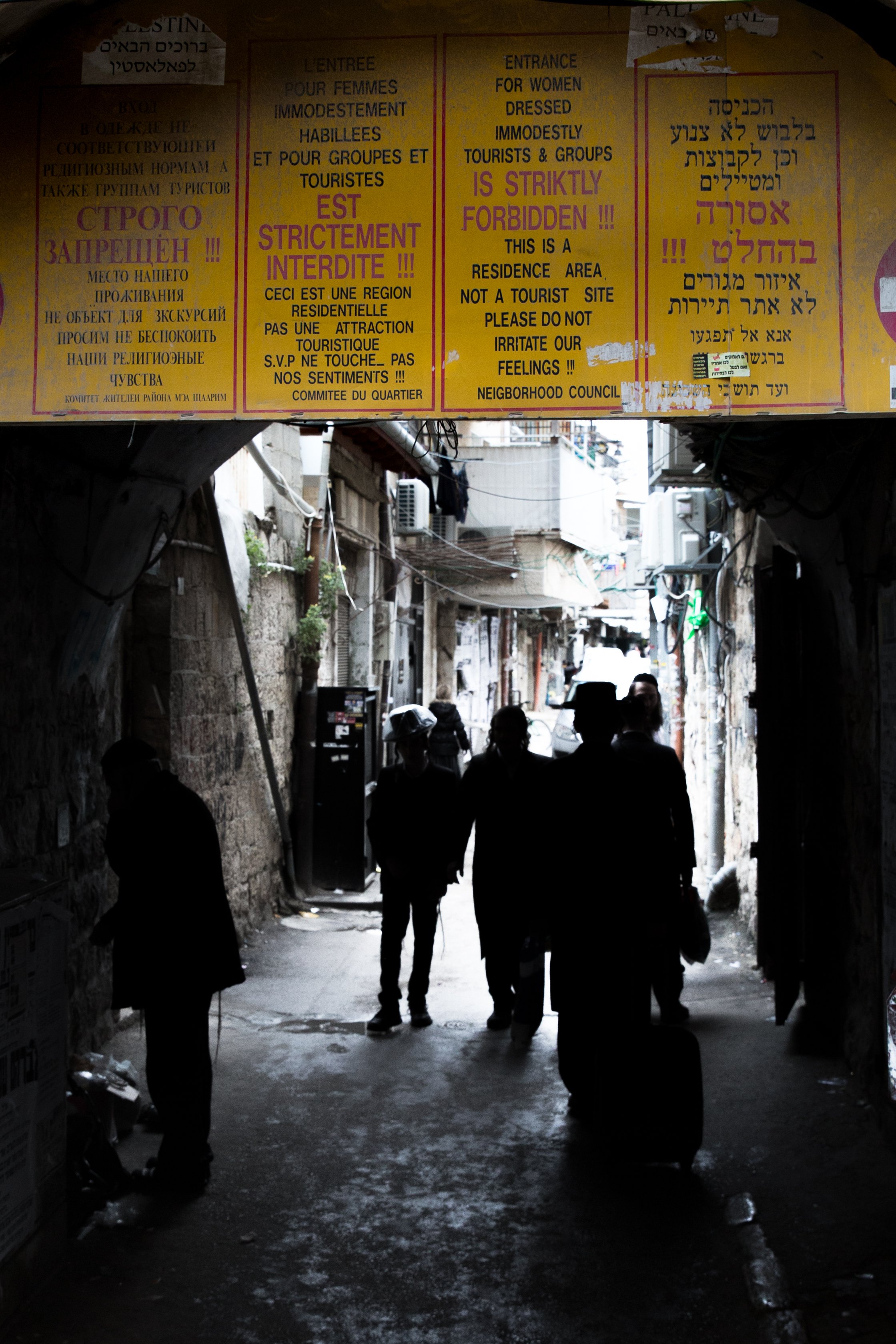 Notices posted by residents near the entrances to Mea She’arim recommend that visitors turn around: tourists carrying cameras are often driven away. The Sikrikim are community lookouts who watch for any perceived threats to their beliefs: their name is inspired by the Sicarii, who tried to expel the Romans during the first century. Pictures of the neighbourhood are usually taken with hidden cameras, as they were for this photo essay (MEE/Laurent Perpigna Iban) 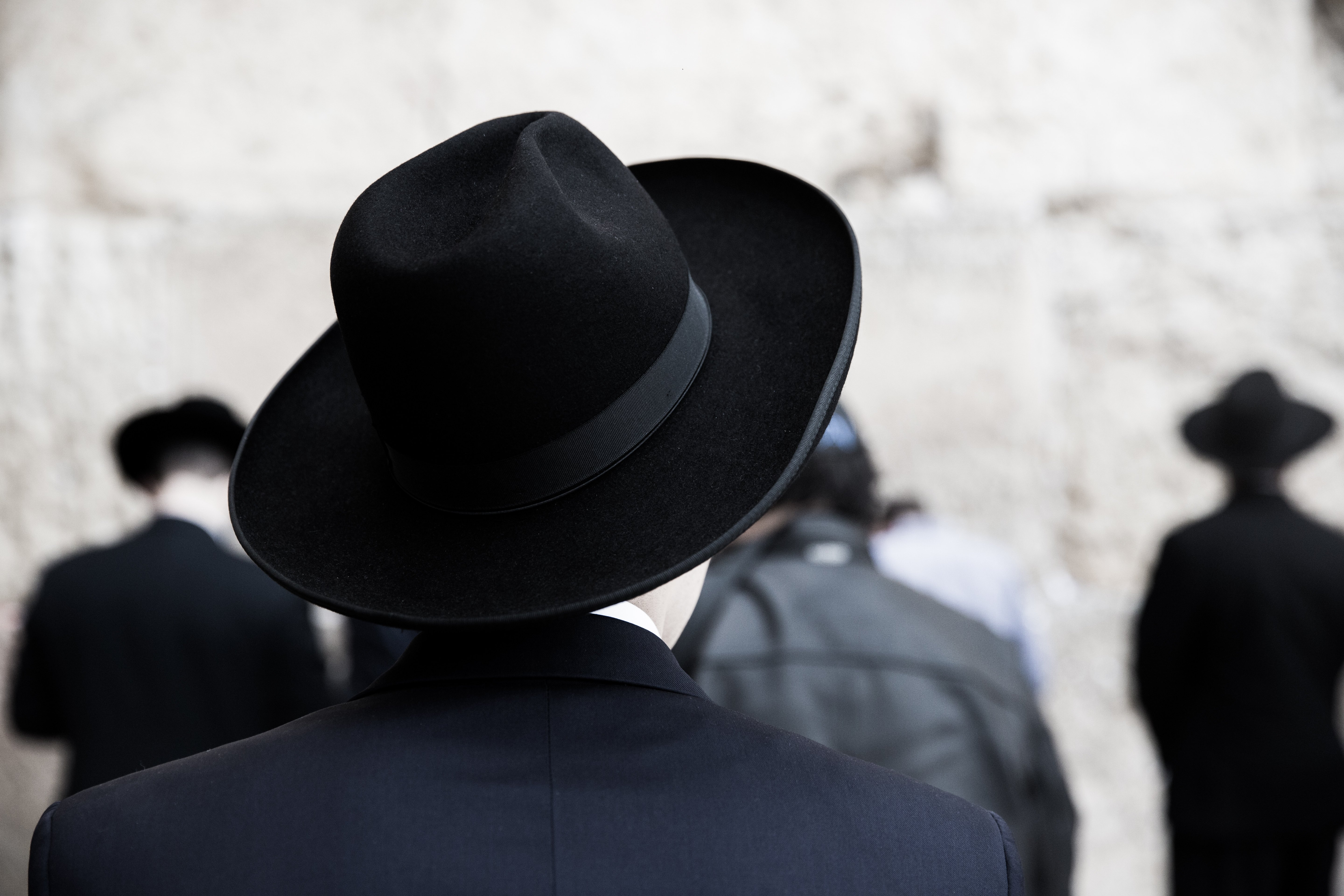 Clashes occur on a regular basis in Mea She’arim. In May, firefighters were attacked when the Israeli flag on their vehicle was pulled off. A few weeks earlier, the effigy of an Israeli soldier was hanged and burned during the Jewish celebration of Purim. The Israeli flag is regularly burned: soldiers are routinely driven out (MEE/Laurent Perpigna Iban) 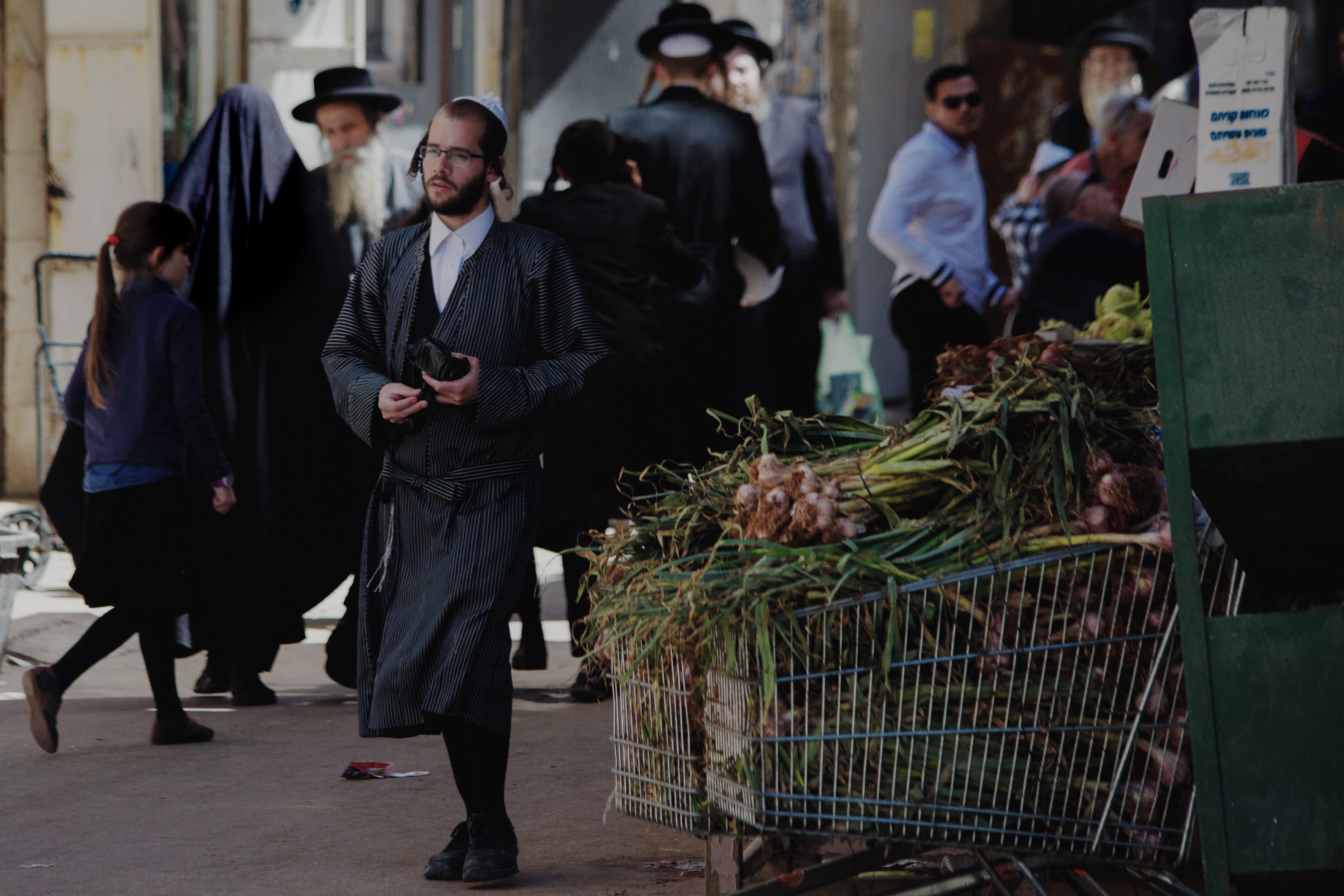 Women in the ultra-Orthodox community come under the authority of husbands, rabbis and religious law. While gender segregation is prevalent – including separate queues at some shops – women run the household and are in charge of educating children. In Mea She’arim,  Jewish women sometimes wear the shal or frumka (left in photo), a full veil akin to the Muslim burqa (MEE/Laurent Perpigna Iban) 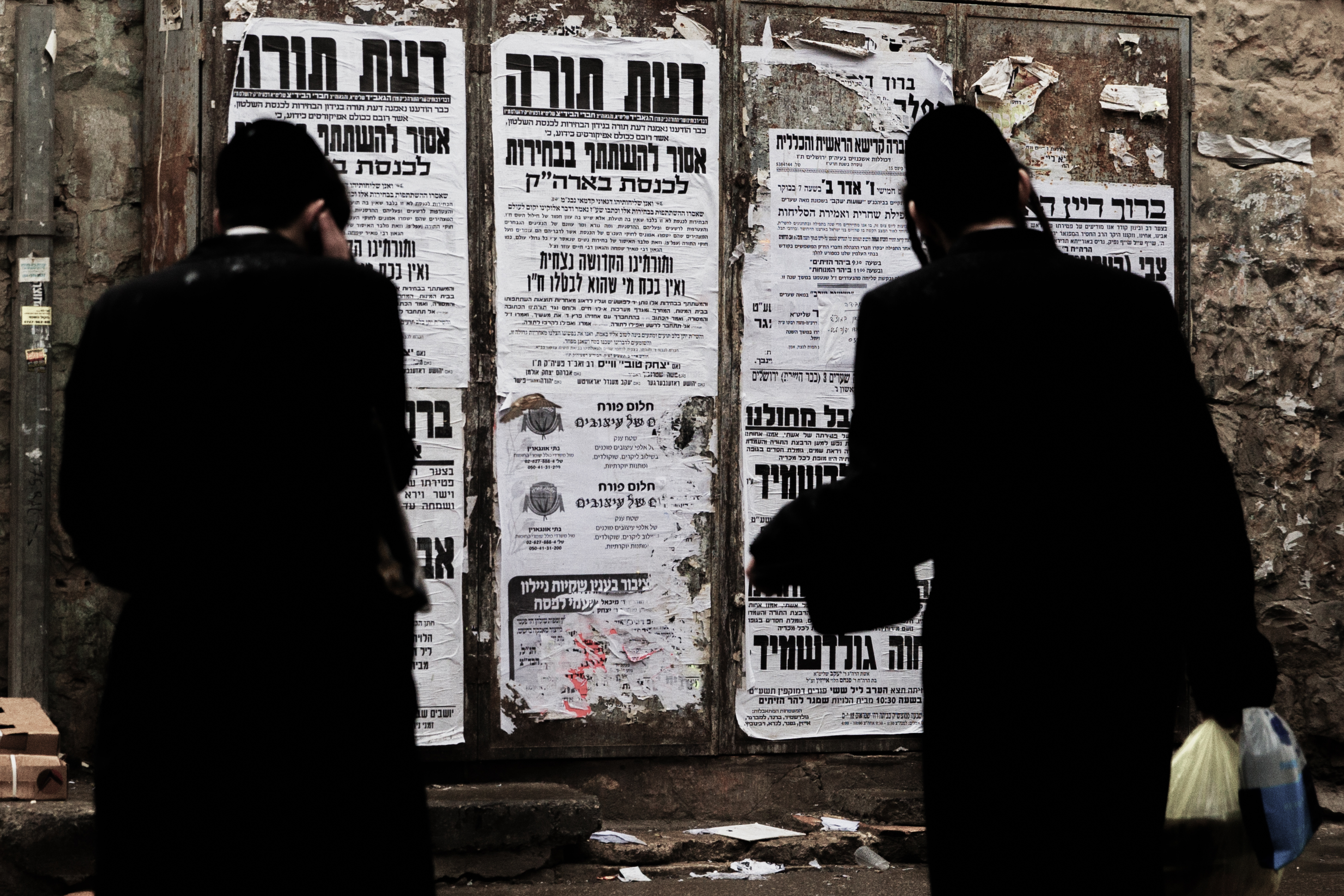 The streets are full of pashkevils (“anonymous posters”), posted on a near daily basis by residents to communicate. Mostly they refer to the Torah and community issues: occasionally they become political, as in the photograph above. Before the April 2019 elections, some rabbis urged the community not to vote: Mea She’arim’s inhabitants consider the Israeli government unlawful as “the Messiah alone can restore the Kingdom of Israel”. As such, Zionism goes against their beliefs (MEE/Laurent Perpigna Iban) 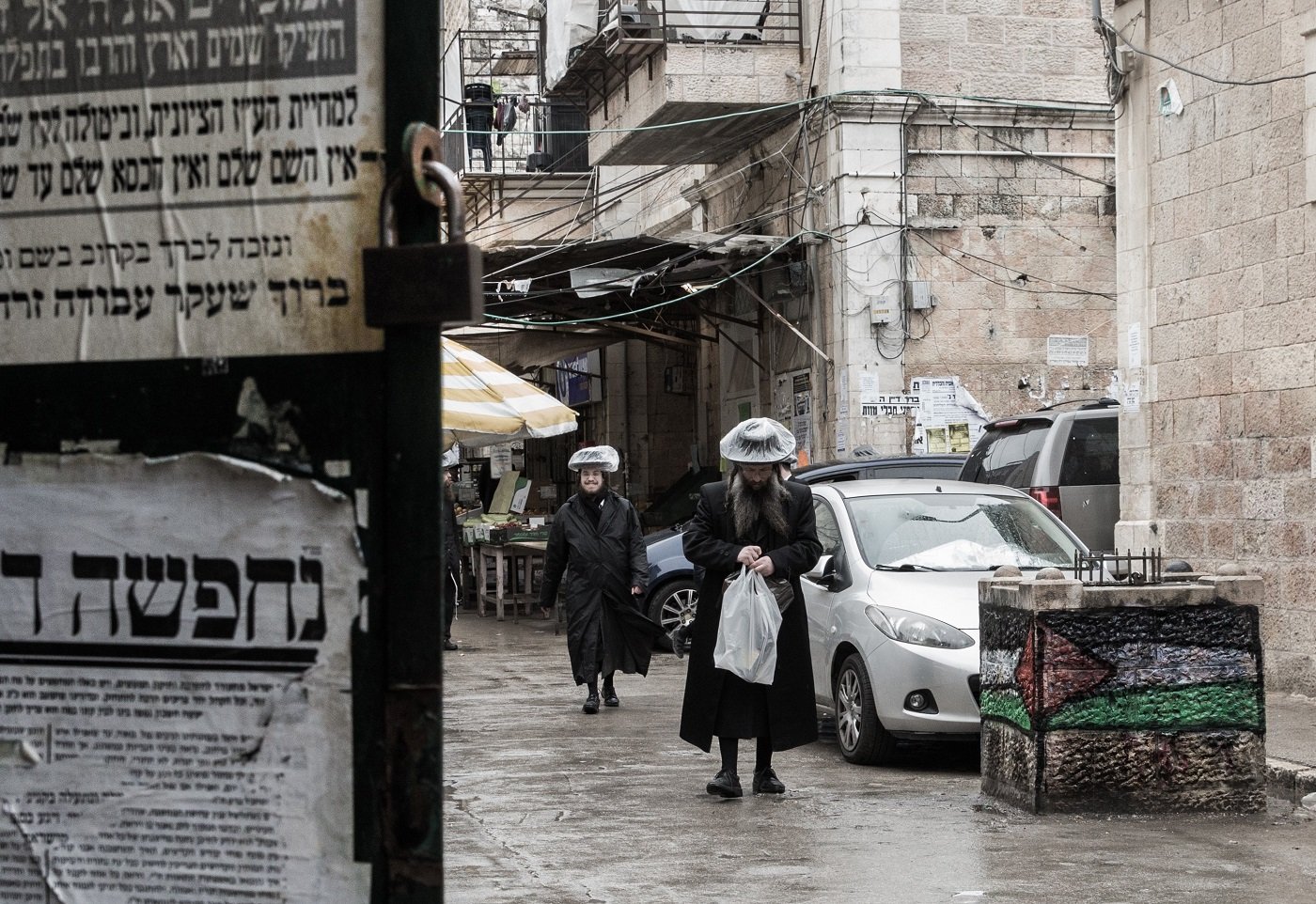 Some residents support the Palestinian cause. Founded in 1938, members of the group Neturei Karta (“Guardians of the City” in Aramaic), reject Israeli nationality, refuse to register their children with the authorities and openly call for Israel to be dismantled. Active across many countries, it routinely drapes Mea She’arim with Palestinian flags: here, one is painted on a concrete post on the right (MEE/Laurent Perpigna Iban) 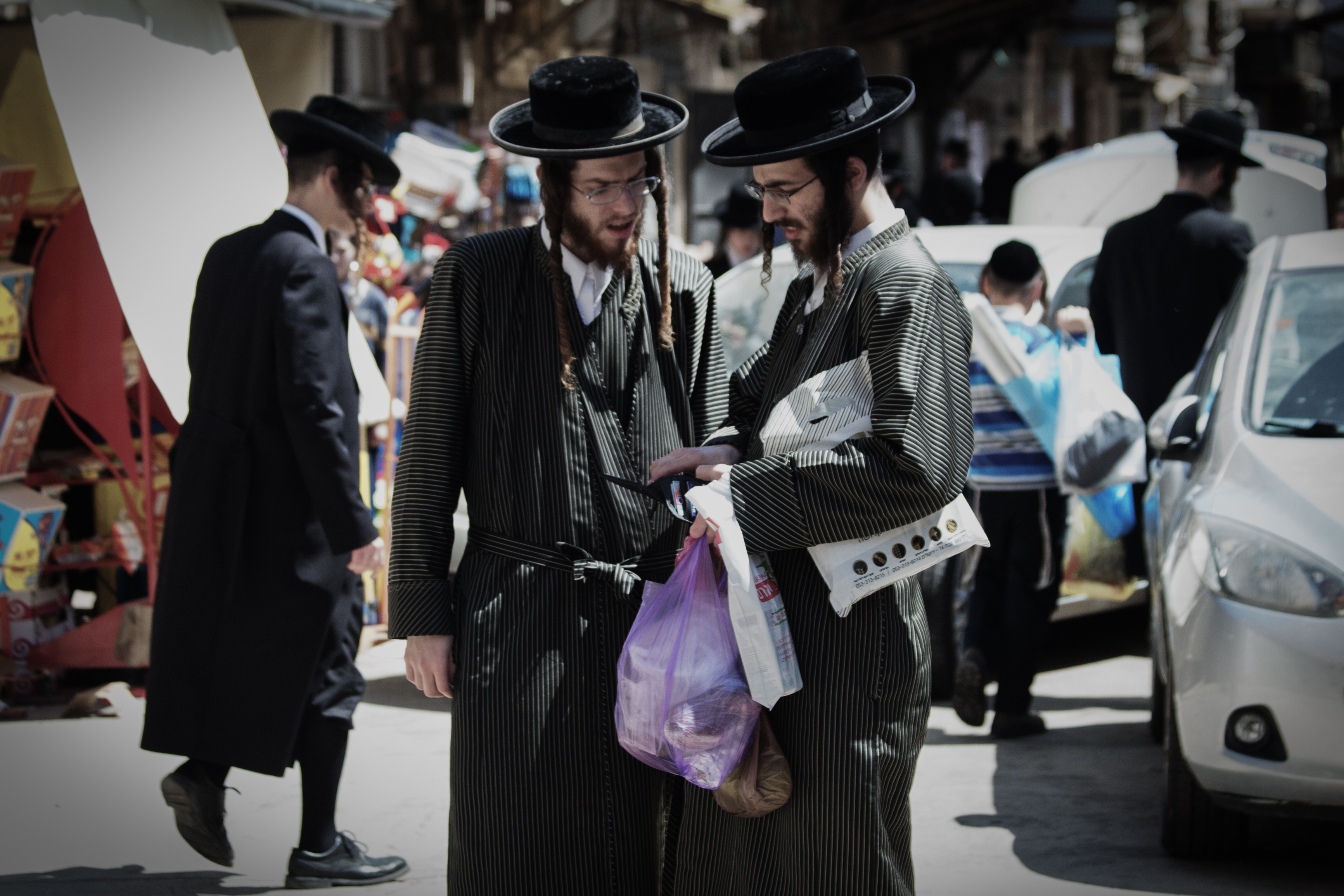 Military units have been formed so the Haredim can integrate, but only 10% of the 30,000 men are eligible join each year. The residents of Mea She’arim  are represented by the United Torah Judaism coalition (Yahadut HaTorah- UTJ), although many are reluctant to become involved with Israeli politics. The issue of military service has had wider consequences. After the April 2019 election, Prime Minister Benjamin Netanyahu was unable to form a coalition, caught between ultra-Orthodox parties and those who wanted to increase the number of Haredim conscripts. Fresh elections have been called (MEE/Laurent Perpigna Iban)

The Origins of Islamic Law

Islamic law represents one of the world’s great legal systems. Like Judaic law, which influenced western legal systems, Islamic law originated as an important part of the religion.

3 thoughts on “Israel and the Most Radical of Its Ultra-Orthodox – In Pictures, Those who will be in their Pursuits Israel’s Undoing”