Yanky Jacob Daskal, and his Exploits – A Protected Member of the Shomrim and Influential –

Getting away with reprehensible abuses….. and there are others.

The following articles are being posted from www.corruptionbycops.com . They have reposted a number of our articles over the years for which we are most grateful. In 2016 we outlined a history of 9 of the Shomrim which can be seen on their site by clicking, here.

Please take the time to read and familiarize yourself with that site. It is about time others are speaking up. It might be about time that the police, the DA, the supposedly trustworthy trusted officials and the honest amongst the Satmar and elsewhere finally take back the currently corrupt Satmar-ruled Brooklyn.

Certainly the vote of that bloc can’t really be enough to close our eyes to all of their crimes.

We will be posting several articles under the heading, “Taking Back the Satmar- Ruled Brooklyn.”

Daskal was charged with rape and criminal sex act, plus three misdemeanors — forcible touching, sex abuse and acting in a manner injurious to a child.

Shomrim’s links to law enforcement have been a subplot in the ongoing federal probe involving two businessmen and a number of NYPD supervisors. In 2016, the FBI investigated what role the supervisors may have played in securing gun licenses for members of Shomrim. Daskal, who lives in Borough Park and has strong ties to the NYPD, was not charged in that case.
http://www.nydailynews.com/new-york/brooklyn/brooklyn-safety-official-charged-raping-16-year-old-girl-article-1.3982706 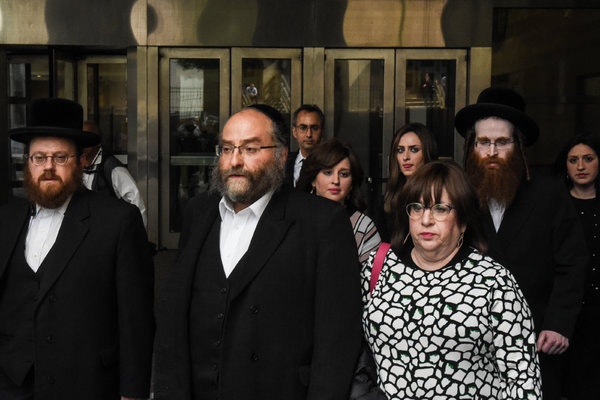 Jakob Daskal, the head of the Brooklyn South Safety Patrol, leaves court in Brooklyn on Friday after he was arraigned on charges that he sexually assaulted a 15-year-old girl.CreditStephanie Keith for The New York Times

On Wednesday, sex crimes investigators for the New York Police Department received a troubling report: The influential leader of a Brooklyn safety patrol known as the shomrim had been sexually abusing a teenage girl, the police were told.

A day later, detectives arrested the man, Jacob Daskal, a leader of one faction of what has been, since the 1970s, a sort of auxiliary police force for the ultra-Orthodox Jews of Brooklyn’s Borough Park, Crown Heights, Flatbush and Williamsburg neighborhoods.

Mr. Daskal, 59, was charged with statutory rape, sexual abuse and other crimes. The authorities believe the abuse took place at Mr. Daskal’s home between August and November of last year, when the girl, who is now 16, was a year younger. But the inquiry is continuing, to determine if the alleged abuse occurred over a longer period of time or if there were additional victims.

The revelations cast another shadow over a group that has long cultivated relationships with New York’s law enforcement and elected leaders — and that has secured government funding for vehicles, phones and other equipment integral to its brand of security for some of the city’s most insular populations. On several occasions, critics have questioned whether the shomrim’s proximity to authority has fostered vigilantism or corruption.

In May 2016, two men linked to the shomrim of Williamsburg admitted to taking part in the assault of a black man in their neighborhood. A month earlier, Alex Lichtenstein, a former member of Mr. Daskal’s Brooklyn South Safety Patrol, which covers Borough Park, was arrested on federal charges of trying to secure handgun permits by offering the police thousands of dollars in cash bribes.
In the case of Mr. Daskal, 59, he was arrested at 12:30 p.m. on Thursday, within the 77th police precinct, the police said. He was then taken to the Brooklyn Special Victims squad, they said.On Friday, the police said that Mr. Daskal had been charged with third-degree rape; third-degree criminal sex act; forcible touching; acting in a manner injurious to a child less than 17; and third-degree sexual abuse. He shuffled, handcuffed, into court for arraignment and pleaded not guilty before Judge Deborah Dowling, who issued an order of protection on behalf of his accuser.
Evan Lipton, a lawyer for Mr. Daskal, said his client was prepared to surrender his passport.
Afterward, as Mr. Daskal was released on bail, some supporters surrounded him in a hallway as Mr. Lipton told him, “Your phones have been seized.”
It was not immediately clear what triggered Wednesday’s report to the police.
Around Borough Park, people seemed dazed by the news of the arrest.

“This is the last thing anybody would believe,” said one man, a neighbor, who stood outside Mr. Daskal’s house about noon, watching as a van from the Crime Scene Unit pulled to the curb. Throughout the morning, investigators, some wearing latex gloves, converged on the brick duplex set back from 46th Street as onlookers, including several children, gathered outside.

On those same streets, the shomrim are seen as quick-acting stand-ins for police officers. With their two-way radios and social media links, they have won praise for keeping a watchful eye on the community, chasing down burglars, controlling crowds and locating the missing.
Residents, many of whom are Yiddish-speaking and cling to a culture rooted in preindustrial Europe, trust the shomrim as liaisons to secular authorities, who can negotiate language barriers and complex social mores.
According to state campaign finance records, Mr. Daskal has been a consistent political contributor over the years.
Police officials, too, have embraced the shomrim. It is commonplace for shomrim leaders to attend promotion ceremonies at Police Headquarters in Lower Manhattan.

In 2015, a year before he became police commissioner, James P. O’Neill, then the chief of department, threw out the first pitch at an annual softball game between officers from the 66th Precinct and members of the Borough Park shomrim. Mr. Lichtenstein played in that game, the Greenfield Classic, named for David G. Greenfield, a city councilman who represents the district. In an interview in 2016, however, Mr. Daskal denied that Mr. Lichtenstein’s criminal case involving the gun permits had anything to do with the shomrim.

On Friday, as investigators streamed in and out of Mr. Daskal’s house, signs of their connections were evident. Parked in the street, near Mr. Daskal’s driveway, were a pair of shomrim vehicles outfitted like police patrol cars: emergency lights; a shield logo; the words “Courtesy Professionalism Respect” written on the side.
https://www.nytimes.com/2018/05/11/nyregion/brooklyn-shomrim-leader-charged-sex-abuse.html

To continue reading the articles in their entirety, click here.