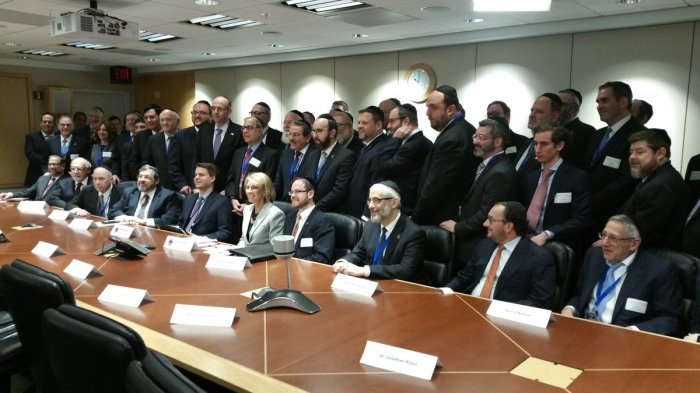 A truly historic meeting today at U.S. Dept of Education with the Secretary and Agudath Israel representatives. @BetsyDeVosED #AIAmission pic.twitter.com/YfBbDZh14I

DeVos met with leaders of Agudath Israel of America, which is based in New York and has active branches in more than 25 states, including Texas, Florida, California, Maryland and New Jersey. Its leaders have successfully lobbied for using public taxpayer dollars to subsidize religious schools in several states.

In a statement released Wednesday, March 8, 2017, about the meeting at the Education Department with Agudath Israel leaders, DeVos said:

I applaud Agudath Israel for their leadership and commitment to providing their community with access to educational options that meet the academic and religious needs of their families. Agudath is a terrific partner and advocate for their families, and I welcomed today’s discussion.

I look forward to continuing to work with Agudath Israel of America, the Orthodox Jewish community and all who believe that every child, regardless of where they live or their family’s income, should have an equal opportunity to a quality education.

DeVos and President Trump have made clear that expanding school choice is an education policy priority.  The administration is believed to be considering a new federal school-choice program, likely a tax credit scholarship program that would offer individuals and corporations incentives to donate money to help families pay for tuition and other educational needs at private and religious schools. There is now is one federally funded voucher program, in Washington D.C., expected to be expanded by the Trump administration.

Trump has said he wants to spend $20 billion to promote school choice, while DeVos has spent decades advocating for charter schools and voucher/tax credit programs. A billionaire from Michigan, DeVos and her family have spent millions of dollars to support religious schools. In 2015, she said in a speech that traditional public education is “a dead end,” and her critics say that she wants to privatize public education, a departure from any previous U.S. administration.

In New York, Agudath Israel has been instrumental in winning state funds for Jewish schools, and has praised Gov. Andrew M. Cuomo, a Democrat, for ensuring that millions of dollars in state funds would be spent for security and other services for these schools. On March 5, Cuomo announced a new “New York-Israel Commission” to strengthen economic and cultural ties between New York and Israel, and among the members is Sol Werdiger, chairman of Agudath Israel.

[How Indiana’s school voucher program soared, and what it says about education in the Trump era]

Although Agudath Israel of America does not ordinarily advocate for Cabinet members, it urged its supporters to lobby the Senate to confirm DeVos, with whom it has worked for years on school-choice issues. When she was nominated as education secretary by then-president-elect Trump, the group put a story on its website saying in part:

Shlomo Werdiger, chairman of Agudath Israel’s board of trustees, expressed his enthusiastic support for Mrs. DeVos’s nomination. “I have had some excellent discussions with Betsy DeVos,” Mr. Werdiger said. “She is intelligent, compassionate and effective. President-elect Trump has chosen wisely.”

The organization supported the Hasidic Jews who took control of the school board in East Ramapo, N.Y., more than a decade ago and were accused by state officials of financial mismanagement that harmed the public schools in the district but helped the private Jewish schools. In 2015, Agudath Israel lobbied against a bill in the state legislature that sought to appoint an overseer for the school board, and despite support for the bill from Cuomo and the chancellor of the New York State Board of Regents, it didn’t pass in the state Senate. In 2016, a compromise bill passed that provided more state money for public schools but did not include a state-appointed board monitor.

The Education Department issued a release Wednesday about the meeting between DeVos and Agudath leaders. Here’s the complete text:

This morning, U.S. Secretary of Education Betsy DeVos met with leaders of Agudath Israel of America about her commitment to supporting all educational opportunities, the importance of IDEA and higher education.

Agudath leaders thanked the Secretary for her leadership and expressed their desire to work closely with her to ensure their schools and community members have access to quality educational opportunities that respect their religion.

After the meeting, Secretary DeVos issued the following statement:

“I applaud Agudath Israel for their leadership and commitment to providing their community with access to educational options that meet the academic and religious needs of their families. Agudath is a terrific partner and advocate for their families, and I welcomed today’s discussion.

“I look forward to continuing to work with Agudath Israel of America, the Orthodox Jewish community and all who believe that every child, regardless of where they live or their family’s income, should have an equal opportunity to a quality education.”

Sol Werdiger, Chairman of the Board of Trustees

And other members of Agudath Israel of America

[So far, Education Secretary Betsy DeVos is just what her critics feared]

U.S. Education Secretary Betsy DeVos, who has made school “choice” a policy priority, met on Wednesday with leaders of an Orthodox Jewish group that has been instrumental in pushing voucher programs across the country. She praised their “leadership and commitment” in helping communities secure schools that “meet the academic and religious needs of their families” and said she looks forward to working with them.