Skip to content
HomeBrooklyn Supreme Court Judge Danny Chun – What are You being Paid to Provide Leniency??? 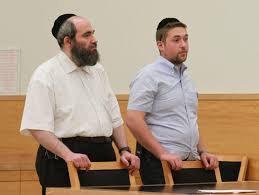 This weekend we were provided a tip that the same judge who ordered community service and $1,400 in reparations fro the brutal beating of Taj Patterson may also be the same judge who is allowing slumlords to fleece their tenants. And, it turns out the tip was unsettlingly correct, making us wonder whether this Judge is just another piece of the ultra-Orthodox Brooklyn food chain allowing the Hasidim if various Brooklyn neighborhoods to act with impunity.

The Tal Patterson ruling that has drawn ire amongst many who believe that the men involved should have been charged with a hate crime and given the maximum sentence. They were instead punished withe community service (which they are now arguing should not be in a “socially diverse setting.” Let’s not forget the brutality with which they beat Taj Patterson. Were it up to us, they would be standing in a black neighborhood with signs like in the “Die Hard” movie wherein Bruce Willis must stand on a corner proclaiming his hatred for blacks, but using more derogatory terms.

Int he current slumlord ruling, it looks like the judicial friend of the Hasidic community is again going to offer leniency, again to the detriment of anyone not Hasidic. All we can do is wonder how cheaply Judge Danny Chun’s services are being offered out. We are further unsettled that it would appear that not only do they have at lease one D.A. in their pockets, Kenneth Thomson, but they have a judge sitting there where D.A. Thompson decides to prosecute.

Have you no conscience Supreme Court Justice Danny Chun? Were you not put in your position to uphold the law? Did you do so in the Taj Patterson case? No.

Attorneys for a pair of Brooklyn slumlords accused of forcing their long-time tenants to live in destroyed apartments and then scaring them into leaving in order to jump in on the growing real estate market are working on a plea deal to resolve the case.

Joel and Aaron Israel face up to 15 years in prison for breaking into one apartment, forcing an unlawful eviction and stealing from three other rent-stabilized buildings they own in Williamsburg, Bushwick and Greenpoint.

The judge told him time was running out.

“This will be the final status update on this case…I used the word ‘final’ so many times on this case, I won’t use the word anymore,” Chun said.

If the plea negotiations fall through by Sept. 15, jury selection will begin after the Yom Kippur holiday on Oct. 12, the judge said.

In a 2013 incident that was reported by Bossip.com, some Jewish men beat up a Black man because they didn’t like his “lifestyle.” That beating ended up blinding the victim in the right eye.

In a follow up on the case, the perpetrators of the violence against Taj Patterson, a gay man, have been handed an embarrassingly lenient sentence in what’s a clear case of hate.

On Tuesday, a Brooklyn judge sentenced the two Hasidic men to only 150 hours of community service. The two admitted to having been involved in the beating of Patterson.

The sentencing of the two, Abraham Winkler and Pinchas Braver, had been delayed by Brooklyn Supreme Court Justice Danny Chun for a week so as to get proper placement for their community service. At the time of going to press, there was still no success in finding a place for the two.

Speaking outside Brooklyn Supreme Court on Tuesday, Braver’s lawyer Robert LaRusso admitted that it’s not a challenge getting an organization to place the two.

“It’s not a problem — it’s just being able to satisfy the prosecutor that the agency that we are asking the community service to be performed is satisfactory to them,” said LaRusso.

Besides the community service, the two have also been ordered by the judge to pay Patterson a sum of $1,400.

The sentencing has been widely criticized, with many saying it’s simply mocking the justice system. The fact that the victim was left blind besides having undergone excruciating pain after the beating should’ve called for more serious sentencing, especially since it wasn’t a case of self defense but hate crime.

“They belong under the prison for beating a man blind,” said one user on Bossip. “If it had been the other way around, the black man would get life.”

“His settlement should have been millions,” said another user. “[It should’ve been] enough at least to privately commission research on creating a bionic eye for him or something.”

The reason why many are disgusted by the sentencing is because it was established that the two are actually the people who committed the crime. Being asked to pay a mere sum of $1,400 for all the lifelong suffering the victim has been subjected to has only worked to irk people more.

To read the article from its original source click here.

A judge in Brooklyn, N.Y. sentenced two Hasidic Jewish men to 150 hours of community service on Tuesday, for their role in the vicious beating of a gay black man in December 2013. They will not spend even one minute behind bars.

Pinchas Braver and Abraham Winkler were the only members of the Ultra-Orthodox Williamsburg Safety Patrol Unit to admit to taking part in the gang attack on Taj Patterson, a fashion student at the New York City College of Technology. Patterson told police more than a dozen men from the local civilian watch group in the heavily Orthodox section of Williamsburg  stopped him while he was walking home.

Patterson’s lawyer claimed the witnesses changed their stories under pressure from members of the neighborhood’s Hasidic community.

“The Shomrim claim they are committed to justice, yet they shut down witnesses with an efficiency the Mafia would envy,” Andrew Stoll said at the time. “They banish and shun any member of their community who dares to come forward.”

Although the prosecutor’s case crumbled, Braver and Winkler pleaded guilty and were sentenced to community service and paying Patterson restitution. A third man, Mayer Herskovic, starts trial next week. Two others had their cases dropped.

The only requirement for the community service is that it be served out at an organization that is “culturally diverse.”

Justice Danny Chun is giving the men 30 days to find a suitable organization or let the Department of Probation place them in a program, reported the New York Daily News. The judge also gave them an extension to pay the $1,400 restitution.